*tl;dr warning. This one is a prolix one.*

Last year I posted a macabre story about researcher and amateur historian Dee Brecheisen who was found after his death to have looted multiple graves in forts and Indian burial grounds. He even kept the mummy of a black Union soldier in his home.

Here’s a follow-up story with much more detail.

Basically, Bureau of Land Management agents got a tip that there was the skull of another buffalo soldier on Brecheisen’s property. They found it, complete with bits of hair and skin, and searched the rest of the place.

They were particularly looking for a veritable looter’s treasure map Brecheisen had shown people when he was alive.

The archaeologists were particularly interested in trying to find a cemetery plot map, because Brecheisen had told people that with it, he was able match up burial registries and determine whom he’d dug up.

Army personnel at the fort between 1854 and 1886 were mandated to maintain such a map — and sometimes criticized for the sloppiness of their record-keeping — to keep tabs on who was buried there. The Army had exhumed remains in 1876 and reburied them at Fort Marcy in Santa Fe, and again in 1886, and reburied the remains at Fort Leavenworth, Kan. 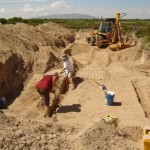 They didn’t find it or much of anything else, sadly, but to build a criminal case against the family and friends who knew of the loot and sold off his estate full of grave robberies without a peep, they had to connect the skull they had to Fort Craig.

So a volunteer team of archaeologists and FBI agents, state troopers, and sheriff’s office folks dug a trench next to a grave an anonymous tipster was marked as a buffalo soldier’s final resting place.

They found empty coffins and bits of bones and sent them to a military department I didn’t know existed but is very cool.

Samples of those remains were sent to the Joint POW/ MIA Accounting Command in Hawaii, which is responsible for bringing back and identifying remains of service personnel from past conflicts — though most are far closer in time.

“It was within their mission, even though these Soldiers were from the 1870s and 1880s,” Hanson said. 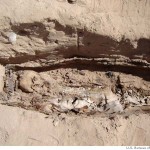 Unfortunately, they were unable to identify any remains, so there was no evidence for a criminal case, and by then, the cemetery was so dug up that they couldn’t leave it like that to be looted even further.

So they hired a contract archaeology firm and they’re the ones who found the remains of 60 men, women and children, including one child found mummified with “eyelashes, lips, combed hair, gown and tiny hands folded across the chest that held desiccated flowers.”

The map which might identify all these people is still MIA, both Brecheisen’s copy and any original that might have been in the files. The archives police are on the job.

(Yes. There is such a profession as archives police. If I had known this as a child, my life might have turned out very, very different.)

The bodies will be reburied in handmade coffins in a national cemetery.

Meanwhile, a wealth of knowledge about post-Civil War era frontier medicine has been unearthed. That’s one good thing to come out of this horrid episode.

One thought on “Update: Fort Craig bodies to be reburied”