The Tayinat Archaeological Project in southeastern Turkey continues to prove itself a bonanza of Bronze and Iron Age archaeological wonders. To last year’s roaring lion sculpture that once guarded the gates of the citadel of Kunulua (aka Kinalua), capital of the Neo-Hittite Kingdom of Patina (ca. 1000-738 B.C.), we can now add the top half of a colossal statue of Patina’s warrior king Suppiluliuma. 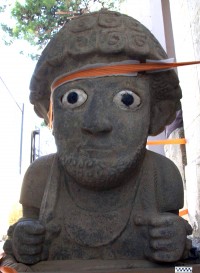 The statue is the head and torso of the king, depicted with a neatly curled beard and head of hair. His wide eyes are made of inlaid white and black stone. His arms are bent at the elbow, forearms extended and hands clenched in tight fists. He wears an armband above each elbow and bracelets on his wrists adorned with lion heads facing each other. In his right fist he holds the head of a spear; in his left a shaft of wheat. He wears a pectoral piece or necklace shaped like a crescent.

The statue is almost five feet tall and intact from the waist to the top of his head, but the bottom half is missing. Archaeologists estimate that when legs were attached the complete statue was between 11 and 13 feet tall. He too was a guardian, positioned at the gateway leading to the upper citadel to the royal city, and must have been a highly impressive one at that. 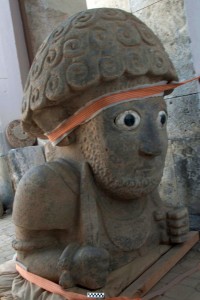 It’s a long inscription on the back that identifies him as the king. A raised relief carved in Hieroglyphic Luwian, an Anatolian language used solely in royal seals and monumental inscriptions, extols the military campaigns and many accomplishments of King Suppiluliuma. We don’t know exactly who he was, but he was named after two kings of the Hittite New Kingdom: Suppiluliuma I (ca. 1344–1322 B.C.) who had revived the flagging kingdom with many military successes including wresting Syrian territories from the control of Akhenaten’s weakened Egyptian empire, and Suppiluliuma II (ca. 1207–1178 B.C.), the last known king of the Hittite New Kingdom who defeated Cyprus in the first recorded naval battle in history.

Experts believe this Suppiluliuma fought against the powerful Neo-Assyrian king Shalmaneser III as part of a coalition of Syro-Hittite states in 858 B.C. Shalmaneser’s father Ashurnasirpal II had conquered Kunulua in the 870s B.C. without encountering any resistance whatsoever. Kunulua King Lubarna caved before the first spear was thrown, handing over huge quantities of silver, gold, tin, iron, oxen, sheep, a large female monkey, linen, furniture, female hostages including the king’s own niece, plus numerous infantry and cavalry troops. Suppiluliuma’s victory 15 years or so later was an important vindication for the humiliated state. 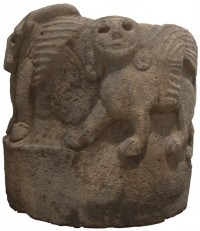 In the same location, archaeologists found a second sculpture lying on its side next to the colossal statue. This one is a semi-circular column base about three feet tall and nearly three feet in diameter. There’s a winged bull figure carved on the curved side with a sphinx to its left. The flat side is bare, because it was probably originally meant to be placed against a wall.

Both sculptures appear to have been ritually buried under the central passageway of the citadel gate, as was the lion found last year. The Neo-Assyrians conquered the area in 738 B.C., destroying the monumental gateway of the citadel. They buried the statues and then paved them over, turning the one-time royal citadel into a sacred precinct and its gateway into a courtyard.