King Richard III, last Plantagenet king of England and the last king of England to die in battle, was buried exactly 527 years ago on August 25th, 1485. Today, on the anniversary of his burial, archaeologists from the University of Leicester will try to dig him up again. It’s the first archaeological excavation ever to search for the lost grave of a British sovereign.

It’s all the Tudors’ fault, of course. Henry Tudor’s Lancastrian troops defeated Richard’s Yorkist army at the Battle of Bosworth Field on August 22, 1485. Richard died on that field, felled by blows to the head from a poleaxe. With Richard’s death, Henry Tudor became King Henry VII. One of his first acts as monarch the day after the battle was to bring Richard’s body to nearby Leicester where it would be exposed, naked, and then hanged for all to see so there would be no question that the old king was dead.

After two days of being subjected to public ignominy, Richard’s body was buried at Leicester’s Church of the Franciscans, aka the Greyfriars. After years of dynastic dispute, the new king certainly wasn’t going to have the one he considered a usurper buried in kingly pomp with his ancestors in London, so instead the friars buried him unceremoniously in their abbey. Ten years later, Henry’s guilty conscience gnawed at him enough that he would spend £50 to have an alabaster memorial monument built over Richard’s tomb.

Then came the second Tudor Henry. Henry VIII split with the Catholic Church and the violent dissolution of the monasteries that followed did not spare Greyfriars. In November of 1538, the Greyfriars abbey and church in Leicester was destroyed. There is no record from that time describing what happened to Richard’s tomb and remains. The popular legend is that his tomb was smashed to bits and Richard’s body was taken by a mob and thrown in the River Soar. The earliest source for that story comes from mapmaker and historian John Speede writing seventy years after the purported events, however, and people who certainly would have written about it in the interim had it happened never mention a desecrating mob.

In fact, according to Christopher Wren, father of the famous architect, in 1612 there was a new monument over Richard’s grave. The property where the monastery once stood had been purchased by Leicester’s former mayor Robert Herrick who built an elegant house and gardens on the site. On the spot where the tomb of the king had been, Herrick erected a pillar inscribed, “Here lies the body of Richard III, some time King of England.” Wren worked as a tutor to Herrick’s nephew at that time and saw the monument while walking the grounds with Robert.

As the centuries passed, development entirely changed the cityscape and the exact location of Greyfriars church was lost, although the neighborhood was known. (There’s a street in the area conveniently called Grey Friars Street.) The Richard III Society put a plaque on a building to mark one potential spot.

A recent archaeological survey on Grey Friars Street done when a 1950s structure was being demolished to make way for new construction cast a whole new light on the question of where the church had been. It was a case of the dog barking in the night. The dig was in the center of the Greyfriars location, but archaeologists found nothing but a small piece of stone coffin lid. If the church had been there, they would have found much more evidence of its presence. This non-discovery discovery moved the epicenter of the Greyfriars site considerably to the west, an area that has more parking lots than real estate.

Another recent discovery that boosted the odds of finding Richard’s burial was made by genealogist and Richard III expert Dr. John Ashdown-Hill. While researching his book The Last Days of Richard III, Ashdown-Hill examined the maps John Speede had made when he searched for Richard’s grave. He found that Speede had been looking at the wrong monastery, Blackfriars instead of Greyfriars.

Armed with this new information, University of Leicester experts used map regression analysis (a systematic comparison of different kinds of maps from different eras) to pinpoint the most likely site of the former Greyfriars church. It’s a parking lot used by the Leicester City Council. 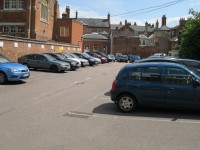 The trenches will run North-South and should intersect with the church’s East-West walls (helpfully, Christian churches are usually built on the same alignment). The ULAS team shouldn’t have to dig too deep as, although there are hundreds of years of remains to get through, the actual strata are fairly shallow. Previous Leicester excavations have shown that the Roman layer is less than a meter down – and if you reach that, you’ve gone way past 1485.

The excavation will continue for two weeks. No visits to the dig will be allowed because the parking lot is for Council employees only, and it’s not in a publicly accessible area under normal circumstances. The weekend of September 8th, however, the site will be opened to the public. Come Monday the trenches will be filled back in and a week later it will be a parking lot again.

Archaeologists are very cautious in their estimates of what they might find. Fragments of an alabaster tomb would be nice; human remains of a male of proper age bearing evidence of fatal battle wounds would be ideal. Since time is very limited, they won’t be able to excavate any remains that aren’t likely Richard candidates, and given that churches and abbeys were thick with burials inside and outside the buildings, they could well encounter an embarrassment of options.

If by some freakish good luck they do find remains that could be Richard’s, DNA experts will attempt to match its mitochondrial DNA to that of a direct descendant down the female line of Richard’s sister, Anne of York. Dr. Ashdown-Hill traced this unbroken matrilineal genealogy to Mrs. Joy Ibsen, an English-born journalist who had emigrated to Canada in her 20s. She was in her 80s when Ashdown-Hill found her and was highly amused to discover she was a 16th generation niece of Richard III. Mrs. Ibsen has since passed away, but her son Michael, a furniture-maker who lives in London, gave a swab of his precious mtDNA to the project. He was also present on Friday when the University of Leicester team explored the parking lot with ground-penetrating radar.