After the Battle of the Marne in the second week of September 1914 halted and reversed the German invasion of France in the first month of World War I, the Allied and the Central powers settled down to four years of trench warfare. Once entrenched, the armies slaughtered each other to move the lines a matter of inches, only to see the lines move right back the next time they shelled each other into oblivion then went “over the top” to get mowed down by machine guns.

None of the armies had planned to be mired in what were essentially a string of long-term sieges stretching 400 miles along the Belgian and French borders all the way down to Switzerland. The Germans figured it out first: going over the top alone wasn’t going to cut it against barbed wire nests and heavy artillery. They had to tunnel underneath the trenches and plant mines that would blow up Allied positions and give the German infantry a chance. They started digging. In November of 1914, they successfully tunneled under French defensive positions, mined and exploded them.

The prescient and daring General Sir Henry Rawlinson, commanding officer of the British IV Corps, requested a specialized battalion of tunnelers on December 3, 1914, but didn’t get them. Sir John French, Commander-in-Chief of the British Expeditionary Force, decided contra Rawlinson to just have the Royal Engineers mine under the German trenches, but they were short on personnel and even shorter on expertise. The sandy wet clay of northern France and Flanders flooded the mine tunnels just as it did the shallow trenches. The RE weren’t able to detonate a single explosive through underground tunnels until February of 1915, and even then the French had started it and the bomb was small.

Major John Norton Griffiths, a civil engineer and former Member of Parliament who had worked on tunnel-digging projects for the London Underground and on drainage and sewage projects for the cities of Liverpool and Manchester, knew he had a solution. When the war started his company was the main contractor working on a major sewer refurbishment project for the Manchester Corporation. The soil in Manchester was thick clay not unlike the soggy, dense soil that was so challenging for infantry and Royal Engineers to dig even shallow trenches into.

The Manchester tunnelers, nicknamed Moles, used a technique called clay-kicking to dig through the terrain. The digger would sit at a 45 degree angle with his back against a wooden frame and his feet facing the digging surface. Using a grafting tool that was a kind of combination pogo stick/spade/posthole digger, he would drive the tool into the soil by pushing with his feet on its crossbar, then pass it over his head to a “bagger” who would put the spoil in sandbags so a third worker could get it out on a little hand-cranked trolley. On his way back, the trolley handler would bring in more timber to shore up the tunnel. This process was fast and it was quiet. The Germans were using pickaxes to dig their tunnels, not exactly the best tools for clay removal and by their very nature percussively loud.

Griffiths wrote the War Office on December 15th suggesting that he be allowed to bring some of his Mancunian sewer workers to France to assess the terrain for mining under enemy positions. Clay-kicking, he insisted, would solve all the problems hobbling the Royal Engineers, and it would ensure they not only caught up to the German head start, but quickly surpassed it. The War Office acknowledged receipt of Griffiths’ letter and filed it under M for Moles.

On December 20, the Germans set ten 50-kg (110 lb) mines in tunnels they had dug just under the British lines at Givenchy in northern France. They exploded them simultaneously underneath the Indian Sirhind Brigade trenches, and then followed up with an infantry attack. When it was over, more than 800 British troops, almost the entire Sirhind Brigade, were dead. The rest had retreated in severe shock. The Germans took over their defensive positions.

In the wake of this disaster, on December 28th Griffiths sent another letter extolling the talents of the Manchester tunnelers and their clay-kicking. Again nothing came of it, but when the Germans successfully mined British positions in January and February too, even the dense British command could no longer stick its head in the clay. The Germans were systemically building tunnel networks and they were succeeding.

On February 12th, Griffiths got the call. Lord Kitchener wanted to see him about his wacky sewer worker idea. Griffiths, a vivacious, eccentric sort of fellow, got on the floor of Kitchener’s office and showed him how clay-kicking worked using the shovel from his fireplace grate. Kitchener thought it was just crazy enough to work, but first Griffiths still had to ascertain that the French soil could be kicked. If he determined it could be, and if he could persuade the Royal Engineers to go for it, Griffiths would have to raise a battalion of moles posthaste. That very night he grabbed two of his Manchester Moles and they sailed to France.

On February 13th and 14th Griffiths met with Engineer-in-Chief Brigadier-General George Henry Fowke plus officers at four other headquarters, each time demonstrating the technique before their astounded eyes just as he had with Kitchener. When Griffiths reached the front lines, he and his Moles tested the soil and found it was perfect for the clay-kicking technique. Fowke agreed to a trial run setup of multiple tunneling companies.

Next up was recruiting. On February 17th, Griffiths got Kitchener’s permission to recruit civilians without having to put them through basic training. They also didn’t have to comply with age restrictions or even be remotely amenable to military structure and discipline. Oh, and they were paid three times the rate of infantry sappers. The next day, he closed down one of his tunnel contracts in Manchester and 18 now-unemployed tunnel workers enlisted in the Royal Engineers. By February 21st, they were digging tunnels in France. He also went further afield, picking up professional copper, slate, and coal miners from all over England.

This motley crew was immediately successful. Clay-kicking allowed them to average 26 feet of tunnels per day while the Germans could only manage 6.5 feet a day. Their tunnels were also far more stable, deeper and harder to catch mid-dig because of how quiet the technique was. Still, as their tunnel networks grew, so did the Germans’ and as the tunnels got deeper and more convoluted, the job got harder and more dangerous. The companies widened the net, recruiting miners from all over the Empire. At the peak of the tunneling program, there were an estimated 150,000 men working underground, some professional miners to do the digging, some infantrymen doing the hauling.

These men worked grueling tasks in hideous conditions, and if they died on the job, as many of them did since the job entailed blowing up the mines when they were done digging them, their bodies would remain in those tunnels for eternity. As with their civilian counterparts, many of the miners’ stories never made the news. The tunnels were military secrets and remained state secrets for years after the war was over. It has taken decades of research and activism by individuals like historian Peter Barton and organizations like The Tunnellers Memorial and the La Boisselle Study Group for the bravery and dedication of the tunneling companies to get their long-overdue recognition.

Peter Barton is now working on a television documentary based on his book about the tunneling companies that is set to air next year. Looking for more information about the Manchester sewer workers who were among the first to brave the underground war, he went through the archives of United Utilities, the company that provides water and sewage for Manchester’s homes and businesses. There he found forgotten photographs of the original Moles working Griffiths’ sewer refurbishment contract.

It’s 100 years since brick-lined sewers were being built under the Manchester suburbs. The archived photos are dated between August 1912 and June 1913 and show the tunnelers and bricklayers in the process of building sewers beneath roads such as Barlow Moor Road in Didsbury and Kensington Road, Chorlton.

The workers then moved to Givenchy on the Western Front in northern France to play a critical and highly dangerous role in the conflict. Their pioneering techniques led to the construction of some 3,000 miles of underground passages beneath no man’s land. […]

Ian Fullalove, wastewater network manager at United Utilities, explained: “These pictures show a different era, when these highly skilled men had to work in really harsh conditions with rudimentary safety equipment. It was a real eye-opener for us.”

Peter Barton is hoping the men in the pictures can be identified by living relatives. He also has a muster roll of Manchester sewer workers who enlisted in the 170th Tunnelling Company, the first unit rushed to

Givenchy to counter the existing German tunnels in February 1915. If anyone out there recognizes the names and/or faces, contact the Manchester Evening News at 0161 211 2323.

This BBC video shows last year’s excavation of the tunnels at La Boisselle, where the tunnels dug by the British miners inaugurated the first massive explosions in the Battle of the Somme. The Lochnagar mine was packed with 24 tons of ammonium nitrate and exploded along with 16 others at 7:28 A.M. on July 1st, 1916. A column of dirt 4000 feet tall spewed from the mine and when the dust cleared, a crater 300 feet across and 90 feet deep was left behind. The Lochnagar Crater is still there, untouched thanks to the family who purchased the land in 1920 and never developed it or used it as anything but pasture land out of respect for the cemetery that it is.

Here’s a 360 degree virtual tour of La Boisselle, which can take you inside the tunnels with contemporary and period photographs. 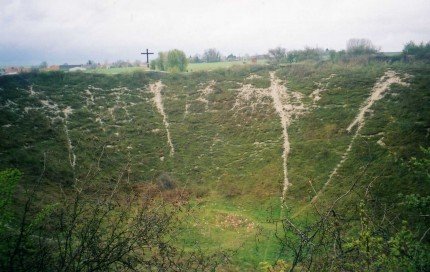