Archaeologists excavating the royal Maya city of El Perú-Waka’ in northwestern Guatemala have discovered the tomb of Lady K’abel, a powerful 7th century Maya queen previously known from an elaborate portrait of her on a stela dedicated in 692 A.D. that was looted from Waka’ in the 1960s. The stone slab is currently in the collection of the Cleveland Art Museum.

The team of archaeologists from Washington University in St. Louis, the College of Wooster in Ohio and Guatemala’s National Institute of Anthropology and History were not expecting to find the tomb of a famous queen from the Classic Maya civilization. Since 2003, their focus has been on studying religious features of the site like shrines and altars rather than burials. This particular spot, the main temple in the center of the city, they’d revisited repeatedly over the years because they found evidence that even after the fall of the last El Perú-Waka’ royal dynasty around 800 A.D., people kept returning to the temple for generations. They left layer after layer of offerings on the surface and dragged large royal stelae to the front of the temple. The team’s plan this season was to clear the main stairway of the temple to study its construction and try to determine why people continued to revere the spot long after the dynasty’s fall.

The main stairway was blocked by a masonry shrine made after the fall from stones taken from other buildings in the city. Once the later shrines were excavated, archaeologists dug underneath the main staircase. They found a monumental fire altar from the post-royal period with a mature woman buried underneath it, likely sacrificed in the dedication of the altar. Beneath that they found another shrine, this one much earlier, and

underneath that was a tomb containing the skeletal remains of a person who was buried with a vast wealth of grave goods.

The quality and number of these goods identified the deceased as someone extremely important. A number of decorated ceramic vessels were discovered with iconography that dates them to the late 7th, early 8th century. There were also multiple pieces of jewelry and figurines made from jade, a material so highly prized by the Maya that it was equal only to the feathers of the Resplendent Quetzal bird in value. The remains of some organic material were left in the tomb. The material is being analyzed now in the hope that it can be identified.

One particular artifact found in the tomb was the equivalent of winning the lottery in archaeological terms: a small alabaster jar carved in the shape of a conch shell with the head and the arm of an elderly person emerging from it. A strand of hair in front of her ear marks her as a woman; her lined face indicates her advanced age. The white of the alabaster indicates this may be a cache vessel called the White Soul Flower which played a special part in royal funerary rituals of the Classic Period. Also, in the Classic Maya religion, conch shells were symbols of the underworld and conch shell trumpets were the dwelling place of royal ancestors and gods. They would be blown during religious rituals to invoke the royals and deities. These factors strongly suggest that the vessel depicts a royal woman buried in the tomb.

That’s not enough to pinpoint who exactly was buried there, however. Royal burials have been found before, but only five of them have named individuals inside. Thankfully, the Maya did us the great favor of engraving a short text consisting of four hieroglyphs on the back of the vessel. The first glyph is severely worn but can still be read. It reads “yotoot” which means “the house of.” The second glyph is well-preserved and probably refers to the contents of the vessel, but it’s unique enough to have stumped the epigraphers for the time being. (Remains inside the vessel are being analyzed which may answer the question and translate the glyph.)

The last two glyphs are the mother lode: the first is a personal name that translates to “Lady Waterlily-Hand” while the second is a female version of the Calakmul Emblem Glyph which translates to “Lady Snake Lord.” The glyph for K’abel is hands holding waterlilies, and we know from the Cleveland stela that Lady K’abel was the daughter of a Calakmul king. King Yuhknoom Ch’een the Great of the Calakmul Snake dynasty conquered what is now the Petén region of northern Guatemala during his reign (636-686 A.D.). King K’inich Bahlam II (meaning “Sun-Faced Jaguar”), king of El Perú-Waka’ and scion of the Wak or Centipede dynasty, helped Yuhknoom Ch’een during the war. Once the Calakmul empire was established in the area, the Centipede king became the vassal of the Snake king and was given the Snake king’s daughter in marriage.

Lady K’abel was not just the queen consort fobbed off on an allied king. She carried the title of “Kaloomte” or “Supreme Warrior” of the Wak kingdom, meaning she was its military governor. She and her husband ruled together for at least 20 years (672-692 A.D.), but as the Supreme Warrior and Lady Lord of the imperial house of the Snake king, she held greater authority than her husband did. A woman “Kaloomte” is extremely rare in Maya history. Lady Snake Lord and Sun-Faced Jaguar were both represented gloriously on stelae which once faced each other in El Peru before they were stolen and sold to US museums. The matching stela of K’inich Bahlam II is now in the Kimbell Art Museum. 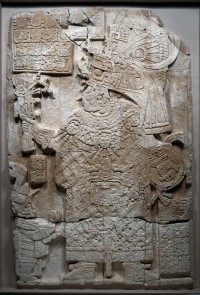 It’s possible that the alabaster vessel does not name the person in the tomb. A later royal could have appropriated it to rub shoulders with the great queen in the underworld, for instance. This is unlikely because the ceramic vessels in the tomb date to Lady Snake Lord’s period. Other artifacts in the tomb confirm that she was a queen of the Late Classic period. A red spiny oyster shell found on the skeleton’s lower torso is characteristic of girdle ornaments worn by Waka’ queens, and a carved

jade head was found in the tomb much like the ones K’abel wears around her neck on the Cleveland stela.

The presence of such an august figure in the history of Classic Maya civilization also explains why the temple was worshiped long after the demise of the Wak kingdom. The people left living in the city in its sad decline remembered their greatest queen, Supreme Warrior and Lady Snake Lord, and made offerings to her at the temple where she was buried.