Archaeologists have unearthed 50 skulls and more than 200 lower mandibles in the Sacred Precinct of Mexico City’s Templo Mayor, the National Institute of Anthropology and History (INAH) announced Friday. The bones are estimated to be around 500 years old and are the largest single collection ever discovered in the Templo Mayor.

The skulls were found in mid-August in the course of construction work to create a new lobby entrance to the Templo Mayor museum. Archaeologists surveying the site before construction detected the skeletal remains behind a ceremonial structure called a cuauhxicalco. Further excavation revealed a cache of 45 skulls and 200-plus jawbones piled on top of a sacrificial stone. They were not carefully laid but rather appeared to have been thrown there in a haphazard manner. The border of the skull deposit area was lined with stones, then filled with earth. The layer dates to the Temple IV construction stage, between 1440 and 1469.

Some of the skulls have cut marks indicating abortive attempts to create skull masks. The Aztecs made masks out of the front part of human skulls. They would adorn them with jade eyes and accessories like necklaces, rattles and obsidian knives. The skulls were not worn as masks. The eye sockets were blocked with decorative stones, so anybody attempting to wear one would not have been able to see. As representations of the death god Mictlantecuhtli, the masks were put on display as ornaments or used as offerings in rituals. Day of the Dead skull masks and sugar skulls in modern Mexico are the descendants of this tradition.

The skulls may have been exhumed before their ritual use rather than having been freshly killed. Preliminary analysis found that most of the skulls belonged to women and men between 20 and 35 years old at the time of their death. They were in relatively good condition thanks to the high moisture content of the soil, but the pressure of the earth fill and later construction on the site did fragment some of the skulls. Still, a good many of them are still whole and archaeologists are optimistic that they will be able to restore the ones that aren’t. 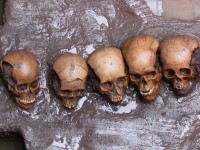 Underneath the sacrificial stone another five skulls were found, all of them with large holes in both temples. These were likely pierced by a wooden stake and strung together on a rack, a monument called a tzompantli made out of the skulls of the sacrificed. Archaeologist Raul Barrera believes the tzompantli were buried beneath the sacrificial stone as an offering to consecrate the stone itself. Aztecs often used skulls in the consecration of newly-built sacred spaces, particularly ones relating to Mictlantecuhtli.

The sacrificial stone, against which sacrificial victims would be made to lean for the priest to open their ribcages and remove the heart, is 17 inches high, 14 to 17 inches long and 4 inches thick. The skulls would serve a symbolic communicative role between the world of living men, the dead and the gods.

University of Florida archaeologist Susan Gillespie, who was not involved in the excavation, said it caught her attention that the skulls that had been on the rack, called tzompantli, were buried separately.

“It provides rather novel information on the use and reuse of skulls for ritual events at the Templo Mayor,” Gillespie said in an email. […]

“We normally associate [the sacrificial stone] with heart removal rather than decapitation,” she said. “It ultimately gives us a better understanding of how the Aztecs used the human body in various ways in their ritual practices.”