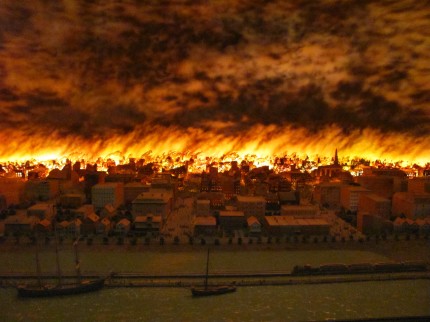 Around 9:00 PM on Sunday, October 8th, 1871, a barn on the corner of DeKoven and Twelfth Streets that housed Mrs. Catherine O’Leary’s five dairy cows began to burn. Despite the legend that would later envelop Mrs. O’Leary and her bovines in eternal ignominy, it’s not clear that the fire started exactly in her barn. It was either there or in the alley right behind it, however, and the O’Leary barn was the first building to burn in the conflagration that would kill 300 people, level 2,000 acres between Lake Michigan and the Chicago River and leave 100,000 people, a third of the city population, homeless.

The story that she was milking an ornery cow that kicked over a gas lantern igniting the fateful blaze was a fiction dreamed up by journalists to give the story anecdotal specificity. It’s like when you tell a joke in the first person as if it happened to you; it makes the punch line hit harder. According to Catherine O’Leary’s testimony at the Board of Police and Fire Commissioners’ inquiry into the fire, she was asleep when the barn went up in flames. Her husband Patrick realized the barn was burning first. He woke her up, but by the time they got outside several houses near the barn were already on fire. Neighbors tried to douse the flames with buckets of water drawn from fire hydrants. They were unsuccessful.

The summer of 1871 had been a scorcher. The high temperatures and drought conditions extended into the fall, and wood predominated in city construction. As every large city has found out, both before and after Nero sang the Sack of Ilium accompanying himself on the lyre, dry wood structures placed close together = raging conflagrations that cannot be contained by human effort. Add to that a strong wind out of the southwest, almost an hour’s delay before the first fire alarm was pulled, fire brigades slow to respond because they were exhausted from having fought a fire all day in Saturday, and human error in dispatching the firefighters to the wrong places, and any opportunity to control the flames before they spread was lost.

The fire split repeatedly, leaping in all directions, driven to terrifying heights by convection whirls that are basically tornadoes of flame caused by the clash of hot air meeting cooler air above and to the side. Witnesses reported seeing walls of flame 100 feet high devouring the city in sheets. So-called “fireproof” buildings like the building housing the Chicago Tribune were consumed as readily and thoroughly as working class cottages and tony north side mansions. The superheated winds alone set structures on fire even before the originating fire reached them.

When the Pumping Station on Chicago Avenue was flattened by flame at 3:30 AM, the firefighters lost their sole means of defense. The river and lake were no help. Even if access to them wasn’t blocked by fire tornadoes, they were bristling with flammable materials like wooden boats, debris and grease on the surface. The people, who had initially rubbernecked the spectacle of fire consuming downtown buildings like the opera house and the court house, began to panic once the fire leaped over the fork of the Chicago River to the north side. There were stampedes as people flocked to bridges and roads leading west towards Lincoln Park, the main gathering area on the shores of Lake Michigan for the homeless of all walks of life.

The fire kept burning through Monday. In the wee hours of Tuesday morning, it began to drizzle. The light rain aided by weakening winds finally put out the Great Chicago Fire. This is what the city looked like when it was all over:

The O’Leary’s cottage on DeKoven Street never burned. They lived there until 1879 when they sold it and moved elsewhere. They moved again repeatedly, forever dogged by their association with the fire. Mrs. O’Leary died of pneumonia in 1895, to the last haunted by the unfair blame placed on her and her poor animals, all of which were burned to death in the fire except for one calf, an immense financial and personal blow to any working class family. 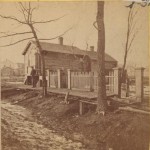 The story had taken immovable root in popular culture in large part thanks to nativist bigotry fanned by a press that gloried in depicting her either as a clumsy, drunken Irish oaf or as a bitter parasite who lashed out at society when her benefits were cut off. Every year in October, reporters would track her down and harass her for interviews. When she chased them off without a word, they would publish scurrilous lies that her house smelled like a distillery and cow manure and that it had no front door and clothes stuffed in holes where windows should be. She never released a public statement and never had a single portrait done or photograph taken of herself.

The city of Chicago, on the other hand, rebounded with astonishing alacrity. Donations poured in from all over the country and abroad, and land speculators took advantage of the opportunity, much like Nero did, to snap up land and build grander, safer structures. Fire codes were rewritten to ensure the city would never be so vulnerable again.

Eventually the story of Mrs. O’Leary and her cow lost the ugly anti-Irish sentiment that had underpinned it for decades. She became an innocuous mascot of sorts, represented by jovial impersonators in parades and floats. The location of the barn and cottage would become something of a shrine for Chicagoans. In 1960 a new fire academy was built on the spot, and the next year a bronze sculpture called “Pillar of Fire” by Egon Weiner was installed at its entrance.

To read much more about the Great Fire and the aftermath, including some truly gripping first-person witness accounts, see the Chicago Historical Society’s website dedicated to the fire. If you’re not in a reading mood, you can browse their excellent image gallery. The Library of Congress has a good collection of stereoscopic pictures of the city in ruins here.

I’ll leave you with Gilda exonerating Mrs. O’Leary and putting the blame on Mame where it doubtless belongs.