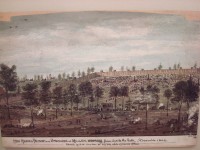 Two years ago, Dr. Sue Moore and graduate student Kevin Chapman of Georgia Southern University found the stockade wall of Camp Lawton, a short-lived Confederate prisoner of war camp established in Millen, Georgia to house overflow Union prisoners from nearby Andersonville Prison, the notoriously overcrowded hellhole in which 12,913 out of the total 45,000 Union prisoners received would die from starvation, disease or violence. Camp Lawton was the largest Civil War prison camp in terms of area (42 acres), but it only held 10,000 prisoners for six weeks. It was evacuated overnight in great haste in November of 1864 when General Sherman’s troops approached during the March to the Sea.

Sherman burned the stockade, and a pine forest grew where the camp had once stood. The area was known to historians, but nobody thought there was anything to find since the stockade was ashes and the camp had been in use for such a brief time. Desultory attempts by archaeologists to locate remains had been unsuccessful; treasure hunters had no interest in exploring a remote location with so little expectation of lucrative discovery.

The area became the Magnolia Springs State Park in 1939, and an adjacent chunk of land was made part of the Bo Ginn National Fish Hatchery under the aegis of the U.S. Fish and Wildlife Service. State and federal protection continued to keep the site in basically untouched condition. There were some archaeological surveys over the years, but shovel tests never turned up any artifacts. A ground-penetrating radar survey of the site by Georgia Department of Transportation archaeologists in 2005 revealed two linear anomalies that seemed to match the documentary evidence of the orientation and placement of the Camp Lawton stockade. Historic Preservation Division archaeologists returned the next year to excavate the anomalies. They found a dark stain in one of their excavation holes which they determined to be a burned log, a likely remnant of the stockade burned by Sherman. 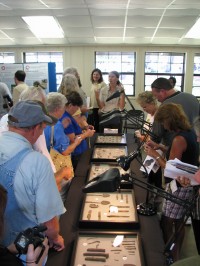 In 2009, experts from the LAMAR Institute, a non-profit organization dedicated to archaeological research in the southern US, went back to the locations examined in 2005 and 2006 to perform another, more detailed ground-penetrating radar survey. This study was the initial investigation phase of a long-term project by Georgia Southern University to locate and excavate whatever might be left of Camp Lawton and its residents. The LAMAR Institute followed up with a metal detector survey of the site, which turned up a remarkable quantity of artifacts left behind by Union soldiers.

This was a highly significant step, both because it gave Georgia Southern’s excavation team a map grid of the site with known locations of artifacts and because it upended archaeological conventions that see the metal detector as an unreliable tool for amateurs. Camp Lawton is a Confederate prisoner of war camp in pristine archaeological condition replete with period artifacts, one of the most important Civil War sites we have. It is the metal detectors that identified it as such. Previous shovel testing had revealed a grand total of two artifacts.

So in 2010, Georgia Southern University, using the LAMAR data and extensive research into Civil War documents, primarily eye-witness accounts from surviving prisoners like prolific mapmaker, artist and Union private Robert Knox Sneden, began to excavate the site and hit paydirt. They unearthed hundreds of artifacts and put Camp Lawton on the map, both literally and figuratively in terms of its historical significance.

Last week, Camp Lawton was host to a much bigger crowd of researchers with many fabulous high-tech toys. Georgia Southern University archaeologists were there, of course, as was LAMAR Institute archaeo-geophysicist Dan Elliott who has uploaded several videos of the excavation to his YouTube channel, and most splashily, PBS’ Time Team America. In classic Time Team fashion, they hit the site with all they had for just a week. There were four teams wielding ground-penetrating radar, another team deploying a fluxgate gradiometer (a tool that measures the gradient of the magnetic field to find small objects close to the surface), another team using electromagnetic conductivity meters to locate buried archaeological features, and metal detectorists, all dedicated to mapping the underground landscape as thoroughly and efficiently as possible. Once that was done, heavy machinery and dozens of archaeologists with trowels and sifting screens stepped in.

Their goal was to locate and unearth the former walls of the prison camp. They were successful. On Thursday, October 4th and Friday, October 5th, the team excavated three of the prison stockade walls. Several living areas of prisoners and guards were also excavated. The details of the discoveries are being hushed up for now so that we can be surprised when the Time Team America episode airs. That means we have to wait until summer of 2013, annoyingly enough, to see just what it is this impressive cadre of archaeologists unearthed.

At least we can catch a glimpse of the stockade trenches in Dan Elliott’s videos. This video shows the south stockade wall and it’s my favorite because of the last line:

:giggle: Isn’t that great? You know they had a total blast.