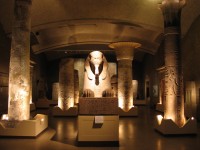 Penn Museum, the University of Pennsylvania’s archaeology museum, is offering a pilot program that gives the blind and vision-impaired the opportunity to explore ancient Egyptian artifacts with their hands. The new Touch Tours kick off this fall with Insights into Ancient Egypt, a docent-led exploration of six carefully chosen artifacts in the museum’s Lower Egyptian Gallery. Every Monday from October 1st through December 10th, pre-booked guests remove all rings and bracelets and degrease their hands with sanitizing wipes, then are invited to touch the artifacts in slow detail, something that is prohibited under normal circumstances in this museum as in all the others. Guide dogs are also allowed into the exhibit.

Sponsored by the BNY Mellon Mid-Atlantic Charitable Trusts and the Dolfinger-McMahon Foundation, the Touch Tours are a new approach to education and community outreach for the non-sighted community. It’s not the first time Penn Museum has created a space where the blind could experience artifacts through touch. The Nevil Gallery for the Blind and Sighted allowed a variety of objects, including many in contemporary art exhibits by blind artists, to be touched by visitors. It was highly popular during its years of operation (from 1971 until 1988), but it was closed after the theft of a Sri Lankan mask on display.

This time the tours are not open to the general public. All groups must book in advance and the museum is otherwise closed on Mondays, so there will be no opportunity for people of ill intent to mingle and disguise themselves among legitimate visitors. Also, the six artifacts chosen for the pilot program are not so vulnerable to theft as they are all large, heavy pieces:

Each artifact was selected by museum staff working with conservationists, Egyptologists and blind focus groups over the past year. Museum Coordinator for Special Tours Trish Maunder has a daughter who is blind, giving her particular insight into what sort of object would be ideal for the Touch Tour. It’s not just artifacts that have elaborate carvings to trace, but also things that have interesting, diverse textures, that have a good backstory and lend themselves to rich descriptions, that have diverse temperatures (granite is colder than limestone, for example), and that are on enough of a human scale that you can get a sense of their entirety by touching them.

The massive sphinx would appear not to qualify on that last score, but since it’s the centerpiece of the Penn Museum’s Egyptian collection they didn’t want to leave it out. Besides, the statue was found buried in the sand with only the head exposed, so the hieroglyphic inscriptions around the base and shoulders are well-preserved while the face and beard are deeply worn. Visitors therefore have more to “see” by touching the areas they can reach. The museum made an accurate scale replica to give people the chance to feel the face and the top of the head.

There are other small replicas on display, as well as tactile diagrams that elucidate some of the details, like individual hieroglyphs. For visually impaired visitors, flashlights are shone on certain areas of the artifacts to illuminate elements that would otherwise be impossible for them to see in the generally dim lighting of the space. 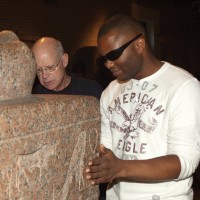 The volunteer docents also play a key role in making the artifacts “visible” to the blind and vision-impaired. They were given several weeks of training by specialists to learn how to describe for the blind. They had to learn to pack their descriptions with verbal cues of color, shape and size to focus on the details of the artifacts in a way they’ve never had to do with sighted visitors. The weeks of training culminated in a special hands-on experience day on September 24th where seven blind and visually impaired visitors, three of them with guide dogs, gave the docents constant feedback to help improve their descriptive skills and communication.

The docents have found that the enrichment of the experience goes both ways. Docents who have been giving tours in the museum for years have had to learn a new language of descriptive detail, getting to know the artifacts in a whole new depth, such as textural changes in areas where conservators have filled in eroded gaps. Sighted visitors usually view an artifact for a few minutes then quickly move on. The visually impaired spend an average of one hour exploring six objects. The blind have alerted them to details they never noticed before, for instance how the sphinx’s paws have lines indicating the claws and how the sides have perceptible ribs.

The program is a huge success already and most of the tours are booked solid. You can try to sign up for a Touch Tour by calling Penn Museum’s Community Engagement Department at (215) 746-6774 or by emailing education@pennmuseum.org. If you’re not able to secure a spot in this round of tours, you can register for future ones. There are no dates for future Touch Tours established yet — the museum needs to raise more money to fund them — but the hope is that the program will continue and expand to the rest of the Egyptian gallery, as well as to the Greek and Roman galleries.

This excellent article covers a recent tour group from the Overbrook School for the Blind in Philadelphia touring the gallery. It gave the students a hands-on appreciation for history in a way they can’t get from sitting in class. Here’s video of the students exploring the Egyptian gallery:

11 thoughts on “Touch Tours of ancient Egypt for the blind”