On August 22nd, 2011, metal detectorists Tony and Veronica Burke found a bronze seal matrix while exploring a field in Cobham, Surrey. As history lovers and members of the Surrey Archaeology Society, they recognized that the pointed oval with the indented image of Mary with the Christ child on her knee was a seal matrix, a form pressed against wax to make an impression of a seal on official documents. They also recognized that this one was unusually large at three inches long, 1.7 inches wide, weighing three ounces.

In keeping with the Portable Antiquities Scheme, the Burkes brought the artifact to David Williams, the Finds Liaison Officer for Surrey County Council, who identified it as the seal matrix of the Augustinian Priory at Stone in Staffordshire, a full 160 miles from the find spot. It’s the iconography and inscription that identifies it as the seal of Stone Priory. Mary wears a crown and is seated on a throne holding a flower in her right hand. Jesus holds a book in his left hand and points upwards with his right, two fingers raised in benediction. The inscription around the edge, “S’ecc Sce Marie et Sci W(v)lfadi Martiris de Stanis,” translates to “The Seal of the Church of Saint Mary and Saint Wulfade, Martyr of Stone.” 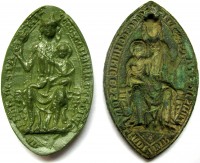 David Williams researched it further, comparing it to a sulphur cast made in the 19th century of a medieval Stone Priory wax seal now at the British Library. They are identical. That means this isn’t just a seal of Stone Priory; it is the seal of Stone Priory in use between ca. 1200 and 1300 A.D. and probably for longer on both sides.

The first priory at Stone was founded around 670 A.D. by King Wulfhere, the first Christian king of Mercia, and dedicated to Saint Wulfad, a local saint we know nothing about. Legend has it Wulfad was the son of King Wulfhere who was killed, along with his brother Ruffinus, by his own father out of fury over their conversion to Christianity by St. Chad. After killing them, their father was so remorseful that he converted to Christianity and allowed his wife Ermenild to build a priory over their graves. This tale is very likely apocryphal. According to the Venerable Bede’s Ecclesiastical History of the English Nation, Book 3, Chapter XXIV, Wulfhere was already Christian when he became king in 658 A.D., and Chad was the second bishop assigned to Mercia during Wulfhere’s reign. 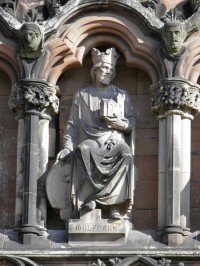 The Benedictine monks of Petersborough Abbey, 118 miles southeast of Stone, also made the same claim: that their monastery was built by Wulfhere to expiate his sin of having murdered his sons after their conversion by St. Chad, that it was located on the very scene of the crime, and that St. Chad concealed Prince Wulfad’s heart inside a cloister well at the abbey. Meanwhile, Bede (Book 4, Chapter VI) and the Anglo-Saxon Chronicle both say that Petersborough was built by the Saxon nobleman and monk Saxulf. So yeah, the Wulfad story is less than reliable.

What we do know for a fact is that the monastery was destroyed by the Danish invaders in the 9th century. It was rebuilt in 1135 as an Augustinian priory dedicated to St. Mary and St. Wulfad. Over the next centuries it prospered thanks to the support of local lords and the Crown, acquiring property all over Stone, including a number of churches, sheep pastures, fish ponds, farms, a mill, hunting and timber rights to various Stafford lands and a royal charter granting them weekly market and yearly fair rights. By the 13th century Stone Priory was the largest and wealthiest monastery in the county. The seal matrix dates to this time, the 13th or 14th century. 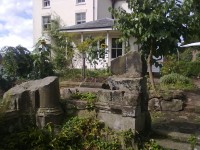 The monastery began to decline in the 15th century. The dissolution of the monasteries under Henry VIII sealed its fate. Many of its treasures were transferred to Austin Priory in Stafford in 1536 in the vain hope that Austin would survive the dissolution, and in 1537 the priory was shut down. The church remained in use as a parish church until it collapsed in 1750. A new church was built on the site using the old stone. All that’s left of the medieval priory is on the grounds of the rectory attached to the 18th century church.

How a seal matrix from this storied priory found its way to Surrey, we don’t know, but one plausible scenario proferred by Cobham historian Dr. David Taylor is that after the dissolution, the seal was taken to Newark Priory in the village of Pyrford, Surrey. Newark Priory is just six miles from Cobham and it too was Augustinian. It could well have taken in a brother refugee from Stone carrying the seal matrix, a highly portable and highly significant identifier of the lost priory. He might have thought Newark was large enough that it would not be targeted according to the Dissolution of the Lesser Monasteries Act of 1536 which had brought down Stone. Unfortunately Newark Priory would not long outlive Stone Priory; it was dissolved the next year in 1538.

After dissolution, Newark Priory was purchased by Sir Anthony Browne, who also owned Cobham Mill. One of Browne’s servants, George Bigley, acquired the Manor of Cobham from Henry VIII. Either one of them could have gotten their hands on the seal as a trinket or a devotional object, and they or later generations could have lost it in a field. This is all purely speculative, of course, and odds are slim we’ll ever find documentation to prove it, but it’s certainly a viable possibility.

Whatever the vicissitudes that carried the seal matrix so far from home, there’s a good chance it’ll find its way back now. Since the bronze seal is not official treasure (only silver and gold or massive quantities of artifacts of advanced age qualify), it was returned to the finders. They could have sold it at auction or to anyone offering them gobs of cash, as long as they shared half the proceeds with the landowner, Dominic Combe. An independent appraiser valued it at £10,000, which is probably conservative.

Thankfully they actually care about the history of the piece, so they made a deal with Stone Historical and Civic Society to sell it to them for £8,000. While Stone raises the money to buy the seal matrix and for a secure display case to keep it in, the finders have given the piece to the Society on long-term loan. In December of 2011, it went on display at St. Michael’s Church in Stone where hundreds of visitors came to see it.

Anybody who’d like to donate to the cause should mail a check payable to “The Seal Appeal” to Steve Booth, Treasurer, 18 Larchfileds, Redwood, Stone, ST15 0DD.