Jane’s Carousel, the 1922 Philadelphia Toboggan Company carousel which once delighted the crowds at Idora Park in Youngstown, Ohio, which was lavishly restored and returned to duty last year in Brooklyn Bridge Park on the banks of the East River, looked like this last night around 9:35 PM: 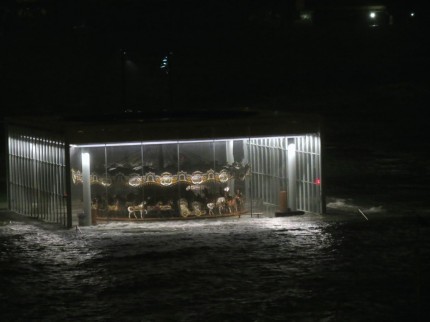 The picturesque location right on the river between the Brooklyn Bridge and the Manhattan Bridge (a neighborhood known as DUMBO) which makes for such a lovely view while riding the ornate gilded horses is not so advantageous when confronted with Hurricane Sandy and her record-breaking 13-foot storm surge. It’s amazing that the lights were still on even as the promontory was turned into an island by the flooding waters.

Although there are no official reports from the carousel website or Facebook account, Gothamist went to check this morning and aside from a few shallow puddles inside the jewel box, the carousel appears to have survived its near-drowning unscathed. There are some overturned trashcans inside and you can see the concrete floor inside the short plexiglass barrier is wet, but it doesn’t look like it reached the wooden platform on which the horses turn. That single row of sandbags around the perimeter of the structure deserves a medal.

Architect Jean Nouvel designed the acrylic jewel box pavilion so that it would give people riding the carousel a beautiful view and so that the beauty of the carousel itself would make a spectacular landmark for the neighborhood. Obviously he designed it to be strong and secure as well.

8 thoughts on “1922 Ohio carousel in Brooklyn besieged by Sandy”