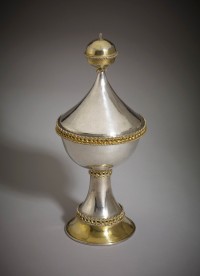 After three years of debate, petitions and official filings, an ecclesiastical court has ruled that St. Cyriac’s Church in the unbelievably picturesque Wiltshire village of Lacock can sell its prize medieval chalice to the British Museum. The parcel gilt Lacock Cup dates to the early 1400s. There are no makers marks so we don’t know exactly when it was made or by whom, but its lack of religious decoration indicates it was originally dedicated to secular usage. It was donated to the church (probably by Sir Robert Baynard of Lackham Manor) 400 years ago, after the Reformation so it was never in danger from Henry VIII’s dissolution squads. The precious vessel was used for centuries as a communion chalice until it was loaned to the British Museum in January of 1963. It has remained there, on display in the Edward VII gallery, ever since.

In 2009, the museum had the cup appraised with an eye to purchasing it. The parish was shocked to hear that they owned something worth close to £2 million ($3,200,000), a windfall the church could most certainly put to good use. St. Cyriac’s is a very old church. Parts of it date to the 11th century although most of it was rebuilt in the early 15th century when the village, a market town propitiously located on the sole ford of the river Avon, prospered from the wool trade. Additions and restorations continued through to the late 19th century altered the church, but after World War II it was added to Statutory List of Buildings of Special Architectural or Historic Interest as a Grade I, a building of exceptional national and historic interest. 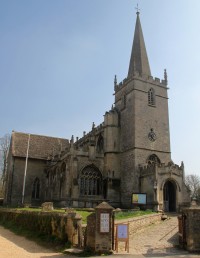 Like all old buildings, it’s in constant need of repairs, but even the most urgent structural issues have not been addressed because the parish had nothing like the hundreds of thousands of pounds necessary to keep the water out and fix massive cracks in the wall. Selling the cup, which must stay in the British Museum because the parish can’t afford the insurance premiums they’d have to pay in order to have the chalice on site, would not only fund important repairs like a non-leaking roof, but would provide an endowment that without touching the principle could generate as much as £50,000 pounds a year to spend in regular upkeep and special restoration projects.

The Lacock Parochial Church Council and Lacock Parish Council held a village meeting to discuss the possible sale. Some residents opposed the sale of the chalice because they didn’t want to lose so precious a piece of the village’s history. Some, including accountant and former parish treasurer Geoffrey Fox, felt that a recession is the precise time when you want to keep your silver and gold rather than to sell it.

For two years the question of whether to sell remained pending until on December 4th, 2011, the Lacock Parish Council notified the villagers that they had filed a formal petition to sell the cup to the British Museum for £1.3 million ($2,000,000). The villagers had 28 days to object and one of them, Geoffrey Fox, did so. He filed a formal objection which can only be decided by an official hearing of the dioceses’ Consistory Court.

The hearing was held last week at St. Cyriac’s with the Reverend Justin Gau, Chancellor of the Diocese of Bristol, presiding. Arguments were heard for two days (Monday, December 3rd and Tuesday, December 4th) and the end of which Rev. Gau decided in favor of the sale of the chalice. Proceeds of the sale are to be held in a charitable trust dedicated to church repairs.

“I’m satisfied that the unique and exceptional circumstances of this case are sufficient reasons to justify the sale of the cup.

“I direct the faculty to pass the sale of this cup. I make the condition that the sale is only to the British Museum, that a photographic record of the cup be made, along with a short history, which would be appropriately displayed, and that a replica of the cup be made, with the cost not exceeding £5,000.”

Geoffrey Fox is of course very disappointed. He also raises an important point that I haven’t seen any of the news articles address:

“This is such a unique item, with only one other comparable item in the country, which is why its value has shot up. I would have thought it should be sold for more than £1.3m, as the insured value is £2.2m, and I wouldn’t think there would be such a large discount.”

Of course insurance value is higher than market value, but if it was appraised at £1.8 million three years ago, why are they selling it for far less today? There is no depreciation here. It is an extremely rare artifact, one of the greatest examples of English medieval gilt silverwork still in existence and it’s in pristine condition.

I suspect the deal is done at this point. If an appeal is filed it will just delay the inevitable for a short time longer. As long as they get paid as much as the cup is worth, I think it’s fair for the church to sell it. It will never be under their leaky roof again anyway, so all they’re selling is the title, really.

The village of Lacock will not be any poorer for the ownership transfer of its onetime communion chalice. Its greatest treasure is itself, a village composed almost entirely of homes and buildings from the 18th century and earlier. It looks like time stopped. There’s a 14th century Tithe Barn (a barn where farmers and shepherds would pay their rents in kind to the abbey) that is so beautiful I could just weep, and just to make sure you’re completely slain, there’s an 18th century lock-up (the old English village version of the drunk tank) attached to it.

There are some neat pictures, including historical ones, on the Wiltshire website and in this killer Flickr set. If you’ve seen the Colin Firth version of Pride and Prejudice, the village of Meryton where the Bennet sisters first meet George Wickham was played by Lacock. The series Cranford and its sequel Return to Cranford were also filmed in Lacock. They just move the cars, throw down some sand to cover the asphalt paved roads and voila, perfect, dreamy, beautiful, frozen-in-time English village.