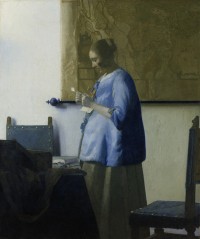 Johannes Vermeer’s masterpiece Woman in Blue Reading a Letter that was restored to its original beauty before going on a tour of Asia last year has touched down in the United States. From February 16th to March 31st, it will be on display at the Getty Center in Los Angeles, its only stop in North America before it returns to the Rijksmuseum in time for the museum’s grand reopening on April 13th.

“This truly represents an extraordinary opportunity for Southern California,” explains Timothy Potts, director of the J. Paul Getty Museum. “Vermeer’s Woman in Blue is one of his greatest and most famous masterpieces. It has very rarely traveled outside of Amsterdam and this is the painting’s first visit to the West Coast. Vermeer’s paintings of women reading letters and engaged in other private, domestic activities have a unique intimacy and reality to them that can only be fully appreciated in the flesh. His finest works, like the Woman in Blue, have a magical immediacy that has never been rivaled.”

Taking advantage of the rare presence of such a great example of an interior subject from the Dutch Golden Age, the museum is exhibiting a number of other pieces along with the Vermeer which focus on people engaged in private moments inside the home. Works from the Getty’s permanent collection include Gerard ter Borch’s Music Lesson, Jan Steen’s Drawing Lesson, Pieter de Hooch’s Woman Preparing Bread and Butter for a Boy, and Frans van Mieris’s The Doctor’s Visit. An additional piece, An Elegant Lady Writing at Her Desk with a Dog beside Her, has been loaned for the exhibition from a private collection in New York. I love the geometry in Hooch’s painting and I can’t help but wonder what the doctor is peering at in his balloon flask in the Mieris work. 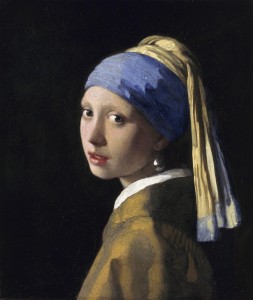 This is a great time to be on the West Coast if you’re a fan of Vermeer and other Dutch masters. The de Young Museum in San Francisco is currently hosting what is probably Vermeer’s most famous work, Girl with a Pearl Earring, as part of an exhibition of 35 important paintings from the Royal Cabinet of Paintings Mauritshuis in The Hague. Girl with a Pearl Earring: Dutch Paintings from the Mauritshuis features 35 important works by Dutch Golden Age masters like Vermeer, Rembrandt and Jan Steen. A companion exhibit at the de Young, Rembrandt’s Century, will be centered on Rembrandt’s etchings and those of other artists who preceded and followed him.

Girl and friends will travel to the High Museum of Art in Atlanta next, where they will be on exhibit from June 22, 2013 to September 29, 2013. The last stop before they return to the Netherlands will be Frick Collection in New York City. You can catch them there from October 22, 2013 to January 12, 2014.

Again we have a major renovation to thank for this artistic bounty. The Mauritshuis is also closed right now while the space is being renovated and expanded. It will remain closed until mid-2014 after which it will have a grand reopening of its own.

10 thoughts on “Vermeer’s Woman in Blue at the Getty”