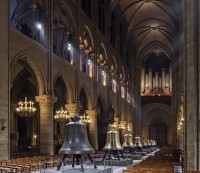 Notre Dame de Paris, the Gothic cathedral that is one of the most famous churches in the world, turns 850 years old this year and has gotten a new set of nine bells for a birthday present. The new bells range in size from 767 kilos (1691 lbs) to 1.91 tons. They were blessed in a ceremony at the cathedral on February 2nd (see this YouTube for the full ceremony; the top comment lists the times they were rung), but since they were lined up in the nave, their rings were only heard individually when their clappers were struck against the sides by hand. On Palm Sunday, the new bells rang together with the one surviving old one in all their glory for the first time.

Despite its glamour and celebrity, Notre Dame has been saddled with inferior bells since the French Revolution took down the cathedral’s 20 bells in 1791 and 1792, melted 19 of them down to make cannon. Only one survived the Terror: Emmanuel, the great 13-ton bourdon (the lowest and largest of the bells) in the South Tower. It was first installed in 1685 and its rich deep notes marked the hours of the day and the great events of French history like the coronation of kings and, since Napoleon had it rehung in 1802, the liberation of Paris on August 24th, 1944. 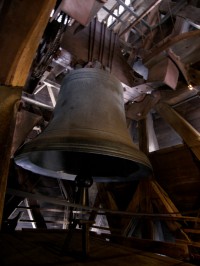 Emmanuel is considered one of the greatest bells in Europe, but Angélique-Françoise, Antoinette-Charlotte, Hyacinthe-Jeanne and Denise-David, the four bells Napoleon III had made and installed in the North Tower in 1856 to commemorate the baptism of his son and replace the ones lost during the Revolution, were considered some of the worst. According to French campanologist Hervé Gouriou, the four formed “one of the most dreadful sets of bells in France. They are damaged and badly tuned.” Built using a cheap bronze alloy, they never sounded great to begin with and wear and tear has only made them worse.

Because of a 1905 law which defines Notre Dame as property of the state with the Catholic Church granted exclusive rights to its use, replacement of the bells was a government matter and the government has had other budgeting priorities, to say the least. The 850th anniversary finally spurred action and the bell replacement project, funded by $3.5 million in donations, began in earnest in early 2012 when the four 19th century bells were removed.

The original plan was to melt them down and reuse the metal to cast new bells, but when the replacement plan was announced in 2011, dozens of historical organizations, artists and religious figures protested the destruction of the old bells. They may not be pretty, but they’re history, immortalized by national literary lion Victor Hugo in The Hunchback of Notre Dame. A legal challenge brought by Father Alain Hocquemiller, prior of the monastery of Sainte-Croix de Riaumont in Normandy, blocked the destruction of the 19th century bells. They are now being kept at the foundry of Cornille-Havard, the foundry that made eight of the nine new bells, and will remain there until the courts decide their fate.

The new bells, made using medieval methods like pouring bronze into clay, horse manure and horsehair moulds, are the same weight and diameter as ones destroyed in the Revolution. They ring the same notes but in a lower tone. The idea is to recreate the richness and harmonies of the pre-Revolutionary sound without slavish imitation. The eight smaller bells made by Cornille-Havard are named Gabriel (after the archangel), Anne-Geneviève (after the mother of Mary and Saint Geneviève, patron saint of Paris), Denis (after the saint, first bishop of Paris), Marcel (after the saint, ninth bishop of Paris), Étienne (after the first cathedral church of Paris which was named after Saint Steven, the first martyr), Benoît-Joseph (after recently retired Pope Benedict XVI) Maurice (after the bishop of Paris who laid the cornerstone of Notre Dame in 1163) and Jean-Marie (after Cardinal Jean-Marie Lustiger, archbishop of Paris from 1981 to 2005). They have all been installed in the North Tower.

The ninth and largest bell was made by the Royal Eijsbouts Bell Foundry in The Netherlands. Named Marie after the mother of Jesus and its predecessor, the second largest of Notre Dame’s bells which rang low and proud from 1378 to 1792, this bell has been hung next to Emmanuel in the South Tower.

But enough of my yammering. It’s time for the main show. The following is the video of the bell ringing event held outside the cathedral after Palm Sunday mass. It’s very long, so if you’d like to cut to chase, 12:15 – 21:50 is the ten tower bells rung in groups from largest to smallest, 43:20 – 45:18 is all ten tower bells rung with three from the spire for additional flavor, and at 58:12 is the “Grand Solemnity,” kicked off by Emmanuel followed by Marie and then the eight smaller ones.

For comparison, here’s what the four 19th century bells and Emmanuel sounded like Christmas Day, 2011:

For more details about the history of Notre Dame’s bells, the replacement project and the specs of the new bells, see this page on Notre Dame’s website.