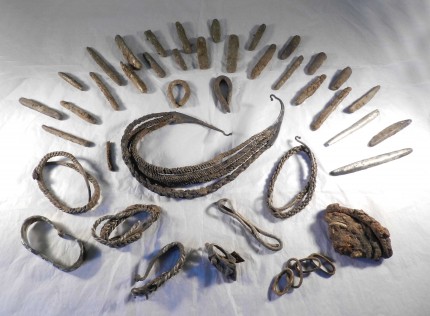 Experts have declared that a hoard of gold and silver treasure from the Viking era discovered by two metal detectorists in a field near Bedale, North Yorkshire, last May is a “significant and nationally important discovery.” Stuart Campbell and Steve Caswell found a part of the hoard, but instead of digging up the rest on the spot, they reported it to the finds liaison officer at the Yorkshire Museum in York. The museum sent two archaeologists to the a pasture (the exact location of the find is being kept secret to deter looters) so the treasure could be professionally excavated.

Once the whole thing was unearthed, the hoard was found to comprise 29 silver ingots, four silver collars, one of which is a large piece made of four plaited silver ropes joined at each end (in the middle of the picture), silver neck rings, half a silver penannular broach, a silver arm ring, an iron sword pommel inlaid with gold foil plaques (the big clumpy looking thing in the bottom right of the picture), four gold hoops from the sword hilt, six gold rivets probably from the same sword.

Andrew Morrison, head curator at the Yorkshire Museum, said: “The artefacts uncovered are typical of a Viking hoard, with the majority of it being silver ingots which were used for currency.

“However the gold sword pommel and a unique silver neck ring are incredibly beautiful and rare finds. We now hope to be able to raise the funds needed to keep them in Yorkshire.”

The pommel style and decoration dates the hoard to 850 – 950 A.D. Its triangular shape with a convex base is a late 9th century form of Viking sword. The plaques of gold foil are decoration with incised animal shapes characteristic of the late Anglo-Saxon Trewhiddle Style, also dating to the late 9th century although it continued to be used in the north of England into the 10th century. Two features mark the pommel as an exceptional piece: its size and its gold decoration. The pommel is 3.3 inches wide, 2 inches high, .5 inches thick; the guard is 3.8 inches long. The total weight of the piece is 10.7 ounces.

There is only one other pommel of comparable size, the Abingdon Sword now in the Ashmolean Museum, which is decorated in the same style but all in silver. The gold on the Bedale pommel makes it unique.

The hoard may have been raiding spoils or it could have been legitimately traded goods buried for later retrieval. The Vikings had a particular fascination with finely crafted metal work (see the National Museum of Scotland exhibit for more on that), more so than the general Saxon population, and although the hoard may have been pillaged, it’s more likely that it was buried by someone who was staying in the area. Many Vikings weren’t coming to Yorkshire just to raid and leave, but rather settled down and became farmers.

Right now the treasure is in the British Museum being cleaned and conserved. The next step is the standard treasure inquest which will certainly result in the coroner declaring the hoard treasure. Anything older than 300 years old or composed of precious metals qualifies as treasure, and the hoard hits the bullseye on both scores. It will then be evaluated for market value and the local museum will have the chance to pay the amount of the valuation to the finders. The York Museum Trust is already preparing to raise the necessary funds to keep the Bedale Viking Hoard in Yorkshire.