According to the authors of a new book, Spies: The Rise and Fall of the KGB in America, Ernest Hemingway was recruited to spy for the USSR in 1941.

One of the authors, Alexander Vassiliev, is a former KGB agent who was allowed access to Stalin-era archives in the 90’s. That’s where he found out about Papa “Argo” Hemingway. He doesn’t have the original documents, though, so all we have to go on are his notes.

From the Guardian article:

Its section on the author’s secret life as a “dilettante spy” draws on his KGB file in saying he was recruited in 1941 before making a trip to China, given the cover name “Argo”, and “repeatedly expressed his desire and willingness to help us” when he met Soviet agents in Havana and London in the 40s. However, he failed to “give us any political information” and was never “verified in practical work”, so contacts with Argo had ceased by the end of the decade.

Apparently Hemingway also spied for the US during WWII, if that’s what you call trolling Cuban waters in his fishing boat for years trying to spot U-Boats and finding exactly one.

On the other hand he did come up with The Old Man and the Sea a few years later, so although he was a crappy spy, he at least found a way to convert it into a Nobel Prize. 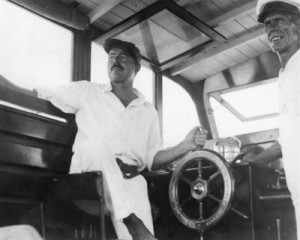