The archaeological site of Werowocomoco, Chief Powhatan’s capital city when the Jamestown colony was founded in 1607, is no longer in danger of development and destruction thanks to a new agreement between the property owners and the Virginia Department of Historic Resources. The conservation easement will protect the site from development and keep it open to future archaeological exploration. 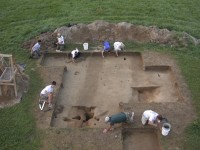 Examining records and maps left by explorer Captain John Smith, among other primary sources, in 2003 historians identified the 57 acre site overlooking the York River in Tidewater, Virginia, as the likely center of Powhatan’s vast chiefdom. Subsequent archaeological excavations confirmed the identification, but they’ve barely scraped the surface. Only 2% of the site has been explored thus far. Landowners Robert and Lynn Ripley have generously allowed archaeologists to excavate the site for the past decade, and now that the easement agreement has been made, their generosity will extend in perpetuity giving researchers all the time they need to dig wider and deeper.

Werowocomoco means “place of chiefs” or “place of power” in the Powhatan language and it was no overstatement. Chief Powhatan — real name Wahunsunacawh — created a confederation of tribes whose territory, called Tsenacommacah meaning “densely-populated land,” stretched from the Eastern Shore of Virginia west to a fall line near I-95. All the tribes had their own chiefs who all paid tribute to Wahunsunacawh. Werowocomoco was the seat of religious and temporal power of the Powhatan paramountcy.

Powhatan’s chiefdom covered 30 political divisions and a population of 15,000 to 20,000 people while Jamestown settlers struggled to survive. Excavations have yielded the outline of the largest longhouse ever found in Virginia and a system of ditches that may have separated sacred and secular areas.

Randolph Turner, a retired state archaeologist whose hunt for Werewocomoco dates to the 1970s, said Powhatan’s empire was “one of the most complex political entities in all of eastern North America.” The leader “had the power of life and death” and expanded his empire through warfare or the threat of warfare.

“He’s one of the most interesting political and military figures that I’ve ever read about,” Turner said. “And we’re just getting hints in the historical records of all he accomplished in his lifetime.” 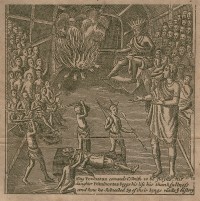 Werowocomoco is an invaluable resource on the life of Powhatan, his chiefdom and culture, all the more so because much of what is commonly known about the great man has been filtered through the perspective of the Jamestown colonists. Notice the title of the article about the easement: “Virginia site of Pocahontas rescue will be preserved.” That’s a reference to the almost certainly apocryphal story that Chief Powhatan’s daughter Pocahontas threw herself bodily over John Smith to save him from being executed by her father in 1607.

Members of the area’s Pamunkey tribe have been involved in the excavations from the beginning, getting their hands dirty in the dig, working with archaeologists to ensure the site is treated with respect and burial grounds are not disturbed. The preservation and continuing exploration of Werowocomoco will reveal their history without the constant and irritating forced connection to Jamestown and the various associated legends.

Ashley Atkins, a Pamunkey member and College of William & Mary doctoral candidate put its neatly: “I want people to understand there was a real civilization, a complex cultural community that existed prior to European colonization. Europeans didn’t bring civilization. They brought a lot of other things, some good, some bad.”

2 thoughts on “Powhatan’s capital will be preserved for posterity”