The Silla dynasty was one of three to rule Korea during the Three Kingdoms period (57 BC to 668 AD). Murals have been found showing cavalrymen with intricate armor on both horse and rider, but until now, that was all the evidence we had of Silla warriors.

Archaeologists excavating the Silla tombs of the Jjoksaem District of Gyeongju (the onetime capital of the Silla Kingdom), have unconvered an astonishingly complete set of armor, scale for the human and barding for the horse, dating between the 4th and 6th centuries AD.

Scale armor is made of hundreds of small, intricately connected metal pieces. Compared to ordinary metal armor, scale armor makes it a lot easier for warriors to move, significantly enhancing the mobility of the entire army.

Murals from the era show that scale armor was used during the Three Kingdoms period, but without any hard evidence, Korean archaeologists have only been able to guess at what the armor might have looked like.

“Scale armor is known to have been used in other countries like China, but in Korea it only existed in rock paintings that we haven’t seen in person,” Lee of the Cultural Heritage Administration said.

Silla burial customs seem to have played a major part in the dispersal of their remains. After burial, a person’s belongings were left outside the tomb for people to take, so finding a buried set of armor is unprecedented.

This burial had a coffin where the body was interred (no remains of the body were found) and a box containing the decedent’s belongings. The armor was found in the coffin, laid out flat underneath the body.

The barding was on the bottom, neck and chest armor first, then the flank and hindquarters armor. On top of that was the scale armor.

You can see how it looks flattened out in the picture on the left. The mural on the right shows it in action. 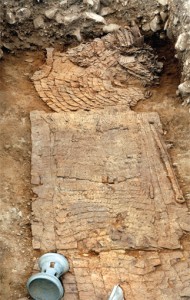