On Monday, June 24th, staff at the museum of St. Peter’s Cathedral in Bremen noticed there was a ring missing from a locked display case. It was a gold and amethyst bishop’s ring made in the 12th century which had been discovered in the cathedral crypt during archaeological excavations under the nave in the 1970s. Authorities were baffled by how the theft was accomplished. The display cases are custom-made, light-proof to preserve the artifacts and secured with an alarm system.

The ring’s monetary value is considerable but insignificant compared to its historical value. It was part of the episcopal regalia found in the graves of eight medieval bishops, a collection of rings, insignia of staff, silver chalices, mitres and vestments from the 11th to the 15th centuries discovered in remarkable condition. The vestments, among them a remarkable 13th century dalmatic (the richly decorated wide-sleeved tunic bishops wear over the robe) with an Arabic inscription on a trim above the seam which translates to “the mighty sultan,” were painstakingly conserved by historical textile specialists in Stockholm, and then the whole collection was put on display when the Cathedral Museum opened in 1987.

Concerned that the ring could be broken up and sold for the materials, the museum offered a 3,000 euro reward for its return, but it was absolution the thief sought. Just two days after the theft, a 47-year-old addict turned himself in for the theft. Remorse at having stolen from the finger of bishop who died almost 1,000 years ago drove him to contact a lawyer and confess to the authorities. He told them he had stolen the ring and sold it to a coin dealer in Bremen. If he told them how stole from a locked display case, that information has not been released.

Police served a search warrant on the coin dealer’s shop and found the ring. In two days it had gone from looking like this: 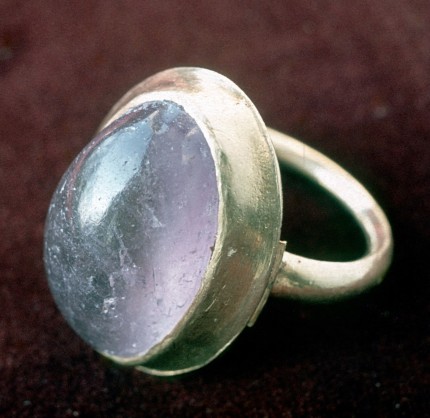 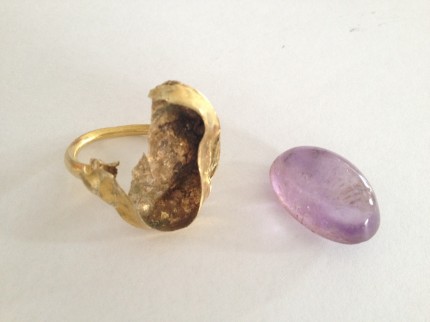 Looks like that wave of remorse hit the thief just in time to stop this historical artifact from being sold as a scrap of gold and a light, cloudy amethyst. Obviously there was no plan to sell it intact on the antiquities market.

Police returned the ring to the Cathedral museum on Friday. Museum director Henrike Weyh says “The damage is great, but I think it can be repaired.” Experts will need to examine it further before determining how and when to attempt any restoration. The museum will spend the time wisely, by auditing its security systems.