In October of 2011, an archaeological survey of a site slated for future road construction near Doneraile, County Cork, Ireland, uncovered the foundations of Caherduggan Castle and its moat. This was a medieval stone castle built by Anglo-Normans next to an early medieval ringfort occupied between 400 and 1169 A.D. by local chieftains of the Duggan family (hence Caherduggan which means “the fort of the Duggans”). The castle was built in tower house style, a stone tower on 40 x 80-foot base with walls more than six feet thick. It was demolished somewhere around the middle of the 19th century and much of the stone was taken away to be reused in new construction leaving behind only the foundations.

The defensive moat around it was deep and had been filled with soil, discarded pottery and animal bones by the 17th century, but the archaeological team from Rubicon Heritage Services were delighted to find that the lower levels were waterlogged, creating an anaerobic environment ideal for the preservation of organic materials like wood and leather. Indeed, within a week the moat turned up its first leather artifact: a 600-year-old woman’s shoe.

Behind the moat they found another blessedly waterlogged area. Archaeologists found it was a deep well, dug down below the water table. The lower levels were still extremely wet and the team immediately encountered large numbers of wood fragments and some fragments of leather preserved by the low oxygen environment.

Then they hit paydirt. On November 30th, 2011, archaeologists discovered a leather belt complete with buckles on both ends and covered with metal studs. Such an elaborate leather piece is a very rare survival. In short order the belt was followed by a pair of leather shoes for indoor use and a bone gaming die in pristine condition. Unlike modern dice, the numbers on the faces (represented by concentric circles) are sequential, one and two are on opposite sides, then three and four, then five and six. The die, shoes and belt all date to approximately the same era, the 13th or 14th century. 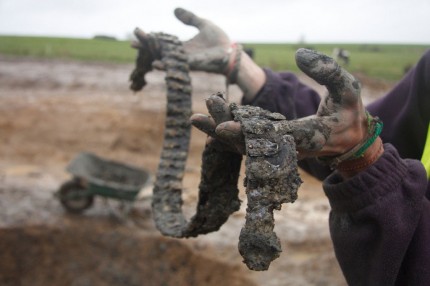 After months of conservation, the leather studded belt revealed itself to be something even more precious than anyone realized. Almost three feet long, the belt was not for human waists but for horse chests. It’s a peytrel, also known as a breast-collar, the part of a harness that connects the saddle to the breast plate. The studs aren’t studs, they’re a group of 36

gilt copper-alloy heraldic shields decorated with lions counter-rampant (meaning they face to the viewer’s right). Each pendant is connected by a hinge to a fixed mount that also bears the counter-rampant lions. The hinges ensured the pendants would move prettily when the horse was in motion.

At each end of the strap are gilt copper-alloy buckles. They were recycled, cut off another piece and attached to the ends of the peytrel so that it could be attached to harness fittings on the saddle and breast plate. They were too valuable to discard once whatever they were previously attached to wore out, and the peytrel with all its pendants was of course even more valuable. However it ended up down that well, it’s unlikely to have been deliberately thrown away.

The counter-rampant lions may help answer some questions. It’s an extremely rare design. The Office of the Chief Herald in Ireland is looking into possible associations, but they may have simply been a decorative choice rather than a nobleman’s arms.

Even if it turns out to be impossible to establish the owner or affirmatively connect the piece to a specific noble house, it is still an exceptional discovery. Archaeologist Damian Shields:

“Post-excavation analysis has revealed it is the only intact example ever found in Britain or Ireland and it may have belonged to a medieval knight or one of his retainers or retinue. It was certainly belong to [sic] someone important in the medieval period. This is a hugely significant find in Ireland.”

Not just in Ireland. Thousands of medieval heraldic pendants from harnesses have been found in Britain in Ireland, but they were the only part to survive. This is the only peytrel we know of that has survived with every part, including the leather, intact. That makes this a discovery of international significance, a museum quality piece that is one of the greatest secular medieval leather objects ever discovered in Ireland.