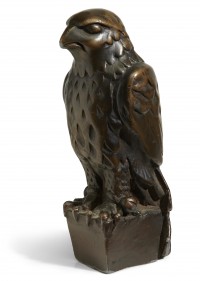 The stuff that dreams are made of is going up for auction at Bonhams New York on November 25th. It’s the black bird from The Maltese Falcon, the MacGuffin that drives the plot of the classic 1941 film noir starring Humphrey Bogart as hard-boiled private detective Sam Spade.

In Dashiell Hammett’s story, the Maltese Falcon is a golden statue encrusted with gemstones that was made in the 1530s by the Knights of Rhodes as a gift for Holy Roman Emperor Charles V to thank him for giving them the island of Malta. The falcon was lost on the way. It traded hands many times over the centuries, getting a coating of dull black enamel at some point to disguise its obvious value. Hammett was apparently inspired by the Kniphausen Hawk, a ceremonial pouring vessel made in the late 17th century for Count George William von Kniphausen. It stands on a rock base and is encrusted with garnets, amethysts, citrine quartzes, emeralds, turquoises and sapphires. It was bought by the Duke of Devonshire in 1819 and has been part of the Chatsworth collection ever since.

The movie prop version looks nothing like the Kniphausen Hawk. First-time director John Huston hired his old high school friend Fred Sexton, a prominent Los Angeles artist with paintings in the collections of stars like Edward G. Robinson and Paulette Goddard, to make the falcon for the movie. Several falcon props were made after Humphrey Bogart dropped the original prop on his foot leaving it with a dented tail. Three copies are known to exist today, two made out of lead weighing 47 pounds, and one six-pound resin version that was used in scenes when the bird is being carried. The original with the busted tail is in the Warner Brothers Museum which can only be visited if you pay $52 for the VIP studio tour (EDIT: No it’s not. The auction falcon is the one that was dropped. See update here.) The resin falcon was lost for years before being rediscovered in 1991. It sold at auction in 2010 to a consortium including actor Leonardo DiCaprio for $305,000.

One of the lead birds was given to actor William Conrad by studio head Jack Warner. It was sold at auction in 1994 after Conrad’s death. Jeweler Ronald Winston, son of Harry Winston, bought it for $398,500 (a record price for a movie prop at that time) and used it as the model to make the bird all the crooks in the story dream of. The Winston falcon is made out of 10 pounds of gold, has cabochon Burmese ruby eyes and two sets of interchangeable claws, one gold, one coral. From its beak hangs a platinum chain with a 42-carat diamond. It took two years to make and cost $8 million. It was displayed at the 69th Academy Awards in 1997.

The falcon coming up for sale in November is the other lead piece. It has been owned for decades by a private collector who has loaned it to museums for public display. There is no official pre-sale estimate yet, but it’s likely to fall in the millions of dollars, which means the black lead bird will be worth almost as much as the solid gold one with the ruby eyes and giant diamond in its beak just because it was in a really great movie once.

13 thoughts on “The Maltese Falcon for sale”