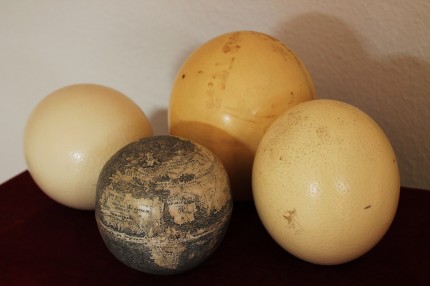 Recent research has found that an elaborately carved globe made out of the sealed-together lower halves of two ostrich eggs is the oldest known globe to include the New World. It’s also the earliest engraved globe and the oldest post-Columbian globe known to survive. Last but certainly not least, it’s one of only two globes in the world to feature an epic sentence that people think was common in ancient and medieval maps but in fact is only known exist on these two globes: “HIC SVNT DRACONES,” the famous “here be dragons.”

The ostrich egg globe was purchased by a private institution that has chosen to remain anonymous at last year’s London Map Fair. The dealer who sold it claimed it had been part of “an important European collection” since it was acquired after World War II. Dr. Stefaan Missinne, a Belgian real estate developer, map collector and published scholar of articles on ivory and silver globes, spent the past year researching the globe, consulting with more than 100 experts in his investigation of the artifact’s date, origin, sources, materials and construction. In addition to extensive documentary research, Missinne submitted the globe to scientific analyses including computer tomography, radiocarbon dating, regression analysis and x-ray fluorescence analysis. Missinne published the announcement of the globe’s discovery and the results of his research in the latest issue of The Portolan, a cartography journal published by the Washington Map Society.

The globe is around 11 centimeters (4.33 inches) in diameter, about the size of a grapefruit. Its maker cut the bottom halves of two ostrich eggs to make a proper sphere out of them. The map was carved into the individual eggshells and the lines traced with a blue-black color. X-ray fluorescence analysis found high levels of iron and traces of barium in the colored parts which indicates the engraver did not use paint but rather iron gall ink, perhaps mixed with an indigo blue derived from irises. Once engraved and inked, the two and then the two pieces were joined using the natural polymer gommalacca (shellac). 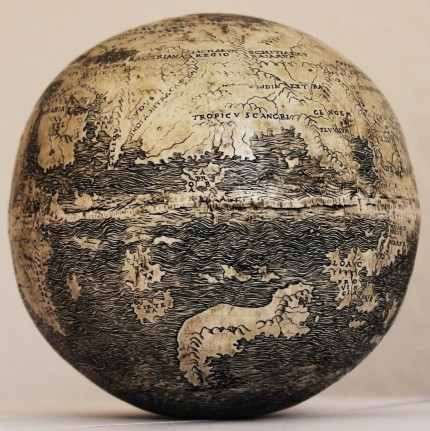 Figure 4. Asia on the ostrich egg globe, showing the large peninsula jutting southward at the right which is evidence of the influence of Henricus Martellus. Photo: Washington Map Society.

The shells themselves are primarily composed of calcium carbonate (CaCO3), as are all bird eggshells, but CT scans found that they’ve lost 50% of their calcium bone density compared to a new ostrich egg. Loss of moisture over time causes this in eggshells just like it does in human bones. By examining a random selection of ostrich eggs at the Museum of Natural History in Vienna, Missinne found that unmounted ostrich eggs lose about 10% of their density every 100 years until they have no moisture left to lose. Regression analysis on the ostrich egg globe found therefore that the egg was new about 500 years ago, giving it a creation date of ca. 1500.

This could not be confirmed with radiocarbon dating. The counterweight material in the bottom of the globe was tested and found to be of fossil origin and 49,310 years (+/– 620 years) old. This is probably because the bottom shell was filled with an organic fossil resin, commonly used as varnish in the Renaissance. Missinne decided not sample the eggshell itself because, according to University of Heidelberg professor Dr. Bernd Kromer, “without knowing the geographical origin of the ostrich egg material and the specific living area of the mother bird, it is very difficult or even impossible to estimate a C-14 date for the egg because of possible interference resulting from the bird’s eating other sources of carbon.” 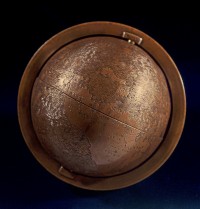 Missinne turned to historical research to confirm the date. After all, the egg halves could be 500 years old but the engraving relatively new. A globe expert noted that the ostrich shell globe shares many significant similarities with the New York Public Library’s Hunt-Lenox Globe, a small engraved copper sphere from 1504-1506, that until now has held the title of the oldest globe to include the New World. Not only does the Lenox Globe share the overall design of the countries and continents with the ostrich egg globe, but it is identical in minute details like the waves of the ocean, the outline of islands and the Latin nomenclature and script and, most awesomely, in the presence over southeast Asia of the sentence “HIC SVNT DRACONES.”

This degree of similarity could not have been created by human hands working on two different pieces. Missinne concludes that the Lenox Globe was not directly engraved but rather was cast from the ostrich egg globe. That means the latter has to predate the former. The major differences between the two globes are the size, shape and the details at the equator. The Lenox Globe is an accurate sphere, whereas the egg has some irregularities. The Lenox is 11.2 centimeters in diameter, so slightly larger than the ostrich egg globe. Lastly, the details along the equator are crisp on the Lenox Globe while they’re obscured by the gommalacca joinery on the ostrich egg.

We know the egg has shrunk a little over time which explains the discrepancy in size and the unevenness in the sphere. The Lenox Globe is crisp along the equator because it was made from two half-spheres of copper alloy cast from the two half shells after they were carved but before they were joined. The other small imperfections in the eggshell were corrected on the bronze during the finishing process. Missinne believes the Lenox Globe was cast directly from a plaster of Paris mold made from each of the two pieces of the ostrich eggshell. The size discrepancy supports this hypothesis. Calculating back from the 50% density loss, the ostrich egg globe was about 11.4 centimeters in diameter when it was new. Direct casting typically results in 1.5% of shrinkage from model to cast, which is consistent with the Lenox Globe’s diameter of 11.2 centimeters.

As for the map itself, Missinne identified several sources for its geographical information. Ptolemy’s Geographia was used for the maps and nomenclature of Europe, Africa and Asia. The shape of the southern peninsula of Asia is very similar to those in maps of world by Henricus Martellus, a German cartographer who lived and worked in Florence in the late 15th century. The bestselling memoirs of Marco Polo were the probably source for Japan, called “ZIPANCRI” on the ostrich shell map. Information about the New World shows the influence of travel logs by Christopher Columbus, Portuguese explorers Gaspar and Miguel Corte-Real, Portuguese navigator Pedro Álvares Cabral and the Italian after whom the continent would be named, Amerigo Vespucci. 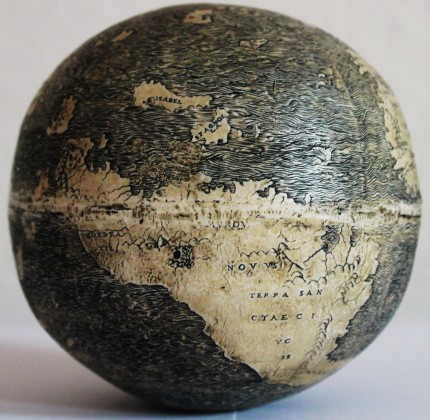 The New World is rudimentary indeed. There is no North America, just a few islands. ISABEL (Cuba) and SPAGNOLLA (Hispaniola) are named; others are not. South America is labelled TERRA DE BRAZIL (Brazil), MVNDVS NOVVS (New World) and TERRA SANCTAE CRVSIS (the Land of the Holy Cross).

There is no mark or any identifying information about the maker. Missinne thinks it was made in Florence and speculates about a highly tenuous possible connection to Leonardo da Vinci’s workshop based on some globe sketches and sphere surface area calculations in the Codex Atlanticus, but there’s no solid evidence of who made the ostrich egg globe and where. Florence is a likely candidate as it was a center of cartography in the Renaissance and was awash in all that Medici banking money for art patronage, but scholars think the Lenox Globe may have had a Parisian origin and the two globes must have been together in order for the Hunt-Lenox to have been cast from the ostrich egg.