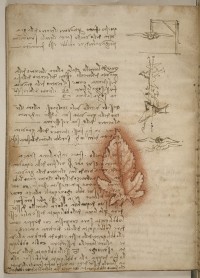 Leonardo da Vinci’s Codex on the Flight of Birds will be on display at the Smithsonian National Air and Space Museum in Washington, D.C., from September 13th through October 22nd as part of its The Wright Brothers & The Invention of the Aerial Age exhibition celebrating the 100th anniversary of Wilbur and Orville Wright’s historic first flight. The codex usually resides in the Bibliotecha Reale in Turin, Italy, and rarely travels, so this a special opportunity to see one of Leonardo’s most important notebooks in the context of the history of human flight.

The Codex on the Flight of Birds is a bound notebook of 18 two-sided pages that Leonardo covered with sketches and notes in his characteristic mirror script. In it he examines how birds fly, principles of aerodynamics and what kind of machine might be able to duplicate natural flight. Leonardo wrote it in 1505-6, almost 400 years before the Wright brothers’ flight, and he made prototypes of several of the machines drawn in the notebook, none of which worked, alas. Still, the concepts he explored — like how air acts like a fluid when it moves over a bird’s wing or how a bird’s center of gravity and center of pressure are different — are some of the building blocks of aeronautics. 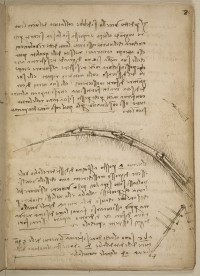 The notebook is a modest eight by six inches in size and will be displayed in a custom case for conservation and security purposes. Since visitors obviously won’t have the chance to put their grubby hands on the codex itself, the museum has set up interactive stations with digitized versions of the notebook. People can leaf through every page using a touch screen and see the details in high resolution. A full English translation of every page will illuminate the backwards Renaissance Italian script.

“For Leonardo, art was the foundation of engineering, and engineering was an expression of art,” said Peter Jakab, chief curator of the museum. “The artist who painted the ‘Mona Lisa’ and ‘The Last Supper’ was a Renaissance visionary who saw the modern world before it was realized.” Jakab, an expert in early flight, is also serving as the curator of the special exhibition.

“The exhibition of Leonardo’s Codex at the Smithsonian, including in an electronically readable and scrollable format, is truly a unique event,” said the director of the Biblioteca Reale, Giovanni Saccani. “In fact, the Codex has rarely been exhibited outside the library, although in 2012, a reproduction of the document together with Leonardo’s self-portrait were fastened on a microchip and carried to Mars aboard NASA’s Curiosity rover—leading Leonardo’s genius on a mission to conquer space.”

One of Leonardo’s drawings in another manuscript is of an ornithopter, a plane with wings that flap like a bird’s. A full-size model built from da Vinci’s sketch by an Italian manufacturer is also on display in this exhibition, along with the original Wright Flyer of 1903 in the Smithsonian’s permanent collection and reproductions of several other earlier and later Wright kites and aircraft.

Here’s a quick intro to the codex narrated by curator Peter Jakab:

Important note: Not specifically flight-related but nonetheless extremely cool is the Leonardo self-portrait that is second only to Vitruvian Man in its frequency of use in history-of-man-and-science collages and documentaries. It too is part of the Bibliotecha Reale’s extensive da Vinci collection, and they loaned it to the Smithsonian for this exhibit along with the Codex on the Flight of Birds.