The mummy discovered by ten-year-old Alexander Kettler in his grandmother’s attic in Diepholz, northern Germany, in August is neither a mummy nor an ingeniously disguised crime victim. Forensic examination has determined that most of it is a plastic skeleton, possibly a medical school model, of recent manufacture topped with a genuine human skull.

The discovery process led scientists on a merry chase. First, Alexander’s father Lutz Wolfgang Kettler hefted the sarcophagus and other boxes into his Mercedes station wagon and drove the lot to the Archaeological Institute Berlin. The “artifacts” that were found along with the mummy case (an earthenware death mask and a canopic jar) were quickly dismissed as fakes, mainly because they look like they were made by 8th graders out of papier-mâché. Next the experts examined the bandages in which the mummy was wrapped and found they’re machine-made linen or cotton of 20th century manufacture. They did not unwrap the mummy on the off-chance that it might be genuine. 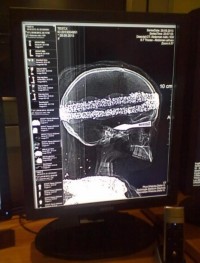 Lutz Kettler wanted to know more, so he took the mummy back home to Diepholz and booked a radiology appointment at a local hospital to see what was inside the wrapping without running the risk of damaging any human remains. CT scans and X-rays found what appeared to be a human skeleton of indeterminate gender inside the linens. The skull had a large arrowhead embedded in the eye socket and was wrapped with a metal “diadem” that looks more like a doubled up version of Björn Borg’s headband or those weird things scrunchy things people put on bald babies’ heads. The rest of the petite 4’10” skeleton seemed to be wrapped in some kind of metal foil which made detailed X-ray analysis impossible. One neck vertebra was missing.

Even though they were unable to confirm whether the skeleton was genuine, the experts who examined it speculated that it might be a composite of several bodies. All they knew for sure after the radiography was that the skull was human. That’s where the authorities stepped in. With a confirmed human skull wrapped in 20th century bandages, police wanted the remains thoroughly examined by forensic experts. After all, wanting to cover up a crime could be a motivation for wrapping the bones in metal foil to keep prying X-rays away from an uncomfortable truth. The authorities confiscated the mummy from Kettler’s garage and brought it to Hamburg so forensic pathologists could determine just when and how this little fellow died.

The pathologists took the plunge and unwrapped the figure. They found it was not a real mummy, nor even a real skeleton. There was no metal foil, but rather a plastic skeleton sprayed with a metallic chemical that blocked X-rays from revealing the plastic within. The skull was real, but the dramatic arrowhead in its eyeball was a child’s plastic toy. The human skull and fake skeleton were packed in kitchen towels used as wadding. The skull shows signs of being a medical school preparation. A circular cut around the skull indicates it was sectioned and opened and then put back together with metallic tape, not baby head scrunchies.

With the forensic examination finding no body and a head that was probably from a med school cadaver, the police determined that there was no crime to investigate further. The Kettlers are still waiting to hear the results of some of the tests done on the skull to determine its age and origin, and Lutz Kettler is still keen to ascertain how this crazy amalgam wound up in his parents’ attic for decades.

One thought on “Attic mummy is plastic with real human skull”