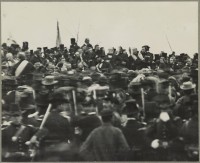 I was going to do a sort of Gettysburg Address inception thing where I rewrite the speech to describe the creation and delivery of the speech, but it was hackneyed and cheesy so I’ll just celebrate the 150th anniversary of Lincoln’s delivery of the greatest two-minute speech in history the old-fashioned way.

On November 19th, 1863, the Soldiers’ National Cemetery in Gettysburg, Pennsylvania, was inaugurated, more than four months after the Battle of Gettysburg (July 1–3, 1863). In the immediate aftermath of the carnage, the dead had been buried on the field, in churchyards, field hospital sites, anywhere a space could be found. Gettysburg attorney David Wills had the idea to create a national cemetery funded by the state governments of the Union soldiers who died there rather than funded by plot purchases by the families of the dead. Pennsylvania governor Andrew Gregg Curtin approved of the idea and appointed Wills to secure the land, contract designers, arrange reburials and organize a dedication event.

Wills invited Edward Everett, a pastor, classicist, politician and renown public speaker, to delivered the featured speech, a two-hour oration that covered ancient Greek burial practices, the Battle of Marathon, the military conflicts leading up to Gettysburg, Gettysburg itself, whose fault the war was, civil wars throughout history and how the states in rebellion wouldn’t hold a grudge once the war was over and we’d all come together again under the Union. (Read the whole oration here.) Wills asked Lincoln to follow Everett with a few brief remarks, and he made it clear in the formal invitation which was sent on November 2nd, two months after Everett had received his invite, that he meant brief. From the invitation:

It is the desire that, after the Oration, you, as Chief Executive of the Nation, formally set apart these grounds to their Sacred use by a few appropriate remarks. It will be a source of great gratification to the many widows and orphans that have been made almost friendless by the Great Battle here, to have you here personally; and it will kindle anew in the breasts of the Comrades of these brave dead, who are now in the tented field or nobly meeting the foe in the front, a confidence that they who sleep in death on the Battle Field are not forgotten by those highest in Authority; and they will feel that, should their fate be the same, their remains will not be uncared for. 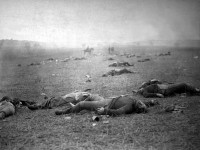 There’s a widely circulated story that the press at the time panned Lincoln’s speech because ears were accustomed in those days to lengthy declamations so his short remarks were considered unworthy. In fact, most of the reviews in the media were positive, many recognizing the power of Lincoln’s words. One of the more famously grouchy reactions was an editorial in the Harrisburg Patriot & Union printed almost a week after the ceremony. Believing all speeches delivered on the occasion to be shameless exploitation of the noble dead by Republican Party shills eager to promote their agenda, the Patriot & Union panned both Everett’s oration and Lincoln’s speech. Lincoln got it worse, though; the editorial veritably seethes with contempt for him.

To say of Mr. Everett’s oration that it rose to the height which the occasion demanded, or to say of the President’s remarks that they fell below our expectations, would be alike false. Neither the orator nor the jester surprised or deceived us. Whatever may be Mr. Everett’s failings he does not lack sense – whatever may be the President’s virtues, he does not possess sense. Mr. Everett failed as an orator, because the occasion was a mockery, and he knew it, and the President succeeded, because he acted naturally, without sense and without constraint, in a panorama which was gotten up more for his benefit and the benefit of his party than for the glory of the nation and the honor of the dead […]

We will not include in this category of heartless men the orator of the day; but evidently he was paralyzed by the knowledge that he was surrounded by unfeeling, mercenary men, ready to sacrifice their country and the liberties of their countrymen for the base purpose of retaining power and accumulating wealth. Hi oration was therefore cold, insipid, unworthy the occasion and the man. We pass over the silly remarks of the President. For the credit of the nation we are willing that the veil of oblivion shall be dropped over them and that they shall be no more repeated or thought of.

A century and a half later here we are repeating and thinking of those words. The Patriot & Union’s descendant, the Harrisburg Patriot-News, has recently seen the light and issued a charming formal apology.

In the editorial about President Abraham Lincoln’s speech delivered Nov. 19, 1863, in Gettysburg, the Patriot & Union failed to recognize its momentous importance, timeless eloquence, and lasting significance. The Patriot-News regrets the error.

Regrets the error… I love that. 😆

The Internet is full of Gettysburg-themed events today. The Google Cultural Institute has three online exhibitions about the address: one curated by Cornell University that explores the Bancroft Copy of the speech and contemporary depictions of its delivery, one about early drafts and multiple versions of the speech, and the last about the cultural impact of the address which is still very much felt today.

Documentary filmmaker Ken Burns has created a website encouraging people to upload videos of themselves reciting the Gettysburg Address. Here’s a mashed up version from famous artists, journalists, pundits and politicians, including all five living presidents:
[youtube=http://youtu.be/_Yzi79zpqQA&w=430]

For more about the Address, see the Library of Congress’ fine online exhibition.

4 thoughts on “Seven score and ten years ago…”