The British Museum’s consistently fascinating blog has an entry decoding the complex iconography of Anglo-Saxon art. If you’ve ever found yourself following the intricate interlacing lines and curves of an Anglo-Saxon design, trying to identify a highly stylized animal or face mask, then you’ve doubtless wished for a labeled map. British Museum curator Rosie Weetch and illustrator Craig Williams have made that wish come true.

They select three pieces from different periods to decode. The first is a silver-gilt square-headed brooch that was unearthed from the grave of a woman on the Isle of Wight in 1855. It was cast in silver and gilded on the front surface, a technique influenced by southern Scandinavian metalwork. Created in the early 6th century A.D., the brooch is a beautiful example of Style I art, characterized by a jumble of interwoven figures art historians amusingly call “animal salad.”

Its surface is covered with at least 24 different beasts: a mix of birds’ heads, human masks, animals and hybrids. Some of them are quite clear, like the faces in the circular lobes projecting from the bottom of the brooch. Others are harder to spot, such as the faces in profile that only emerge when the brooch is turned upside-down. Some of the images can be read in multiple ways, and this ambiguity is central to Style I art.

Once we have identified the creatures on the brooch, we can begin to decode its meaning. In the lozenge-shaped field at the foot of the brooch is a bearded face with a helmet underneath two birds that may represent the Germanic god Woden/Odin with his two companion ravens. The image of a god alongside other powerful animals may have offered symbolic protection to the wearer like a talisman or amulet. 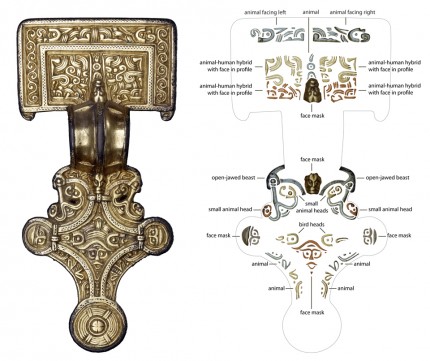 The next example is from a century later, the great gold buckle from the early 7th century Sutton Hoo ship burial. It’s a Style II piece, characterized by more fluid intertwined animal figures. There are 13 animals on the buckle surface: snakes and four-legged creatures on the plate and tongue shield, snakes biting themselves on the loop, two animals biting a smaller animal on the top of the buckle, and two bird heads on the shoulders of the buckle.

Such designs reveal the importance of the natural world, and it is likely that different animals were thought to hold different properties and characteristics that could be transferred to the objects they decorated. The fearsome snakes, with their shape-shifting qualities, demand respect and confer authority, and were suitable symbols for a buckle that adorned a high-status man, or even an Anglo-Saxon king. 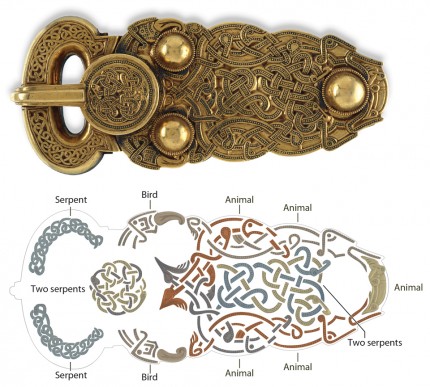 The last piece skips ahead to the 9th century Trewhiddle Style, named after the town in Cornwall where a hoard of Anglo-Saxon coins and decorated artifacts were discovered in a tin mine in 1774. The style is distinguished by enlaced animals, birds and humans, leafy scrollwork and a particular emphasis on using silver rather than gold and brass. The Fuller Brooch features the classic Trewhiddle humans, animals and plants along the border, but the central iconography is unique.

At the centre is a man with staring eyes holding two plants. Around him are four other men striking poses: one, with his hands behind his back, sniffs a leaf; another rubs his two hands together; the third holds his hand up to his ear; and the final one has his whole hand inserted into his mouth. Together these strange poses form the earliest personification of the five senses: Sight, Smell, Touch, Hearing, and Taste. Surrounding these central motifs are roundels depicting animals, humans, and plants that perhaps represent God’s Creation.

The metaphoric significance of these figures, its best-in-class quality and the unique vision of the piece may suggest a connection to the court of King Alfred the Great, who was not only a successful military leader but also had a deep and abiding passion for learning and education. The long period of Viking raids had decimated centers of learning. Alfred made it a mission to reinvigorate Latin education and, for the first time, to advocate learning in the English vernacular. He put his money where his mouth was, personally translating four major works from Latin into Old English: Pastoral Care by Gregory the Great, The Consolation of Philosophy by Boethius, St. Augustine’s Soliloquies, and the first fifty psalms.

Chapter XXXIV of his translation of Boethius uses the senses as a metaphor for enlightenment and understanding:

But gold and silver stones and every kind of gem and all this present weal enlighten not at all the eyes of the mind nor at all whet their sharpness for beholding true happiness but they rather blind the eyes of the mind than sharpen them For all the things which please us here in this present life are earthly and are therefore fleeting But the wonderful Brightness which enlighteneth all things and ruleth all things willeth not that souls should perish but willeth to enlighten them If then any man can see the brightness of the heavenly light with the clear eyes of his mind then will he say that the brightness of the shining of the sun is darkness beside the eternal brightness of God.

Since the motif is unique, the work of the highest caliber and the dating consistent with Alfred the Great’s reign (which ended in 899 A.D.), it’s entirely possible that the Fuller Brooch was crafted by artisans at Alfred’s court, likely for someone of great wealth and rank.

Sadly the article stops at just these three pieces, only whetting my appetite for more mapping of Anglo-Saxon designs. Weetch and Williams should go through the entire collection of the British Museum and decode every artifact in this way. Then they should animate the creatures untangling themselves from each other and make it interactive so we can select to follow one line at a time. Make it so.