Four gigantic stone axes were found in the 1990s, but they’re only getting reported now as researchers document the finds in the now-dry Lake Makgadikgadi basin to study Stone Age climate and migration changes.

They haven’t been precisely dated and thousands of similar but smaller stone tools have been found on the site. Look at the size of these things: 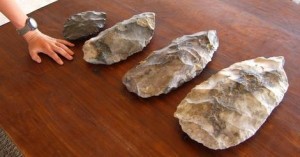 What the hell kind of Stone Age Sasquatch wielded those monsters, is what I want to know? I assume the largest ones had to have been used two-handed.

There’s no comment in the articles on how they might have been used. The research is really not so much about the tools themselves, but about what the presence of the tools can tell us about human interaction with a changing ecosystem.

Professor David Thomas, Head of the School of Geography and the Environment at the University of Oxford, said: ‘Many of the tools were found on the dry lake floor, not around its edge, which challenges the view that big lakes were only attractive to humans when they were full of water.

‘As water levels in the lake went down, or during times when they fluctuated seasonally, wild animals would have congregated round the resulting watering holes on the lake bed. It’s likely that early human populations would have seen this area as a prolific hunting ground when food resources in the region were more concentrated than at times when the regional climate was wetter and food was more plentiful and the lake was full of water.’

Makes sense to me. In fact, I’m not sure why people thought otherwise.