La Belle, one of the ships French explorer Rene-Robert Cavelier, Sieur de la Salle, sailed to the Gulf of Mexico on his ill-fated colonizing mission, sank in a storm in Texas’ Matagorda Bay in 1686. In 1995, the wreck of the 54-1/2-foot-long supply ship was found in excellent condition, the bottom third preserved intact with its contents by the mud of the sea floor. Archaeologists from the Texas Historical Commission spent two years excavating the wreck, building a cofferdam around it, draining the water and then digging it out of the mud. They were able to recover the hull of the ship and 700,000 artifacts, including swords, cannons, bronze hawk bells, pottery, thousands of glass beads and mirrors intended for trade and a skeleton so well preserved that there was still tendon tissue on the bones and a large amount of brain material in the skull.

As with other exceptional raised shipwrecks like the Mary Rose and the Vasa, La Belle’s wooden hull needed to be conserved immediately to ensure it wouldn’t dry out too quickly and warp or shrink. The ship’s timbers were sent to the Conservation Research Laboratory at Texas A&M where they were soaked in polyethylene glycol (PEG), a polymer that replaces water in wood and stabilizes it. PEG treatment takes a long, long time, like decades, and since it’s petroleum-derived, the cost rises with the price of oil. 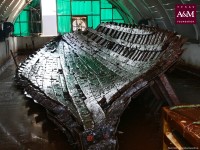 When the budget for the conservation ballooned from $330,000 to $1.4 million solely because of PEG prices, in late 2010 conservators changed course and decided to put the ship timbers in a custom-built freeze dryer 40 feet long and eight feet wide. Kept at a constant temperature of 60 degrees below zero, the seawater bound to the wood sublimates — transforms directly from solid to gas — in significantly less time than it takes for PEG to replace water.

To ensure that the timbers retained their shape and size, the hull was disassembled and each piece tagged and scanned. Molds were made so researchers had the original shape of each part for comparison. After running some tests on smaller items, the ship components were placed in the freeze dryer for four to six months until all the bound water was gone. The wreck of La Belle has 600 component parts, including the keel, keelson, ceiling planking, mast and futtocks (those curved ribs in the ship’s frame), so it took several loads to dry them all.

Reconstruction of the ship was scheduled to begin in October of 2013 at the Bullock Texas State History Museum in Austin, but it has taken a little longer than originally planned. On Thursday, July 17th, the largest portions of La Belle were loaded onto an 18-wheeler and transported from the Riverside Campus of Texas A&M to the Bullock Museum. Included in this first delivery were the 800-pound keel, the 1,100-pound keelson, the forefoot, more than 20 floor planks, buttresses, the mast, 40 first futtocks, more than 20 second futtocks and 25 third futtocks. (Yes I am completely in love with the word futtocks and plan to use it as a curse word on a daily basis from now on.)

On October 25th, the museum will debut a new exhibition, La Belle: The Ship That Changed History, which in addition to traditional displays of artifacts, maps and pictures of the excavation and conservation, will most excitingly feature the public reassembly of the hull. Reconstruction should be completed in May of next year, after which the hull will be encased in glass and placed on display in the center of the museum. A replica of the rest of the ship will be built around the encased hull and visitors will be allowed to walk on the glass over the original ship so they can look down at it and all around at the replica. Such a brilliant idea. This is going to be a blockbuster exhibition.

There will also be a “4D” film, Shipwrecked, for visitors to enjoy. From the museum’s upcoming exhibits page:

Created in collaboration with award-winning production house, Cortina Productions, the film will be on view daily in the Bullock’s popular Texas Spirit Theater, a 4D venue that offers an immersive experience combining the high-drama of 3D with sensory effects built into the seats and environment. Filmed on board one of the few sea-worthy vessels modeled after ships of the 1600s, the film dramatizes the story of La Salle’s venture, revealing the struggles, personalities, and conflicts through the eyes of one of the only survivors of the expedition, Pierre Talon. Pierre’s family was recruited as colonists for the voyage, and at the age of 10, he was separated from his mother and siblings and sent by La Salle to learn the language of the Caddo people in the hopes of establishing trade and facilitating the expedition. Adopted by the tribe, at the age of 14 Pierre was subsequently captured by the Spanish. In the film, he recounts to his captors all that he saw from the moment the ships were setting sail from France.

This news story has a brief overview of La Salle’s mission, some great footage of the hull during the conservation process and a phenomenal mockup of the exhibit with the encased hull and replica built around it that seriously looks real.

7 thoughts on “La Belle moves from freeze dryer to museum”