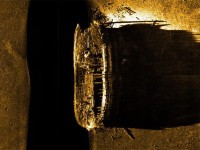 One of two ships from British explorer Sir John Franklin’s ill-fated 1845 expedition to find the fabled Northwest Passage has been discovered off King William Island in northern Canada. The ship appears to be in excellent condition. It’s standing straight up, with the bow five meters (16’4″) off the sea and the stern four meters (13’1″). The sonar image indicates that the deck is largely intact. Even some of its structures are visible, including the stumps of the masts that were sliced off by ice when the ship went down. With the deck still in place in the frigid Arctic waters, archaeologists are optimistic that there will be well-preserved artifacts still inside the ship.

It’s the sixth time since 2008 that Parks Canada has led a search of the Arctic seabed for the Franklin ships. This year the search area was the Victoria Strait, between Victoria Island and King William Island in the Nunavut territory. It was the largest search yet, a partnership between private and public organizations including Parks Canada, the Royal Canadian Geographical Society, the Arctic Research Foundation, the Canadian Coast Guard, the Royal Canadian Navy and the government of Nunavut. They also had new technology on their side. Parks Canada recently acquired a remotely operated underwater vehicle which played a key role in identifying and documenting the wreck.

A team of Government of Nunavut archaeologists surveying a small island southwest of King William as part of the expedition has also made significant discoveries: an iron davit (part of the boat-launching mechanism) from a Royal Navy ship and a wooden object that archaeologists believe could be a plug for a deck hawse (the pipe through which the chain cable was threaded). The davit bears the telltale “broad arrow” marks of the Royal Navy and the number 12. These artifacts were found on September 1st, six days before the sonar encountered the ship. The discovery reinforced that the marine search was in the right area.

It’s not clear at this point which of Franklin’s ships it is. Sir John and 128 crewmen set out on his fourth Arctic expedition with two ships, the HMS Erebus and HMS Terror. He was 59 years old and it had been 20 years since his last trip to the Arctic. The ships were provisioned with enough tinned foods to last three years (unfortunately the cans were poorly soldered and lead leached into the food) and outfitted with steam engines and iron cladding to help the ships break through the year-round ice. 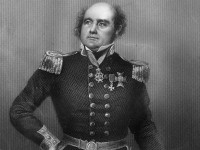 European witnesses — crew from the whaler Prince of Wales — last spotted the ships moored to an iceberg off Baffin Island on July 26th, 1845. Historians believe Franklin wintered on Beechey Island only to become trapped by the ice off King William Island in September of 1846. The crew left the icebound ships and tried to make their way south on foot, but disease, starvation and lead poisoning ultimately claimed all of their lives.

Finding out what happened to Franklin and his crew became a cause célèbre. Thirty-nine expeditions were launched over the next 50 years to find some trace of Franklin’s expedition. The first clues were found in 1850 on Beechey Island, including the graves of three crewmen. A later expedition found a letter on King William Island noting that Franklin had died there on June 11th, 1847. In 1854, Inuit hunters told Scottish explorer Dr. John Rae that they had witnessed Franklin crewmen dying while walking on the ice and that the few survivors had resorted to cannibalism. Osteological analysis of remains found on King William Island in 1997 confirmed that they had indeed been cannibalized. Franklin’s body was never found.

The search for the ships has taken on new urgency in the past few years as melting ice has increasingly opened the Northwest Passage to shipping. The statement on the find from Prime Minister Stephen Harper emphasizes the significance of the find as the historical foundation of “Canada’s Arctic sovereignty.”