The Museum of Chinese in America was founded almost 30 years ago as the Chinatown History Project, a small community institution dedicated to preserving the oral histories, artifacts and records documenting Manhattan’s Chinatown.

Over the decades as the collection increased in size, the scope of the museum has widened to include documenting not just the history of NYC’s Chinatown, but of the Chinese experience in the United States.

Now it has moved into newly renovated digs six times larger than the original. Formerly an industrial machine repair shop, the new museum space was designed by board member and renown architect Maya Lin, the designer of the Vietnam Memorial in Washington, D.C.

This core exhibition, “With a Single Step: Stories in the Making of America,” was created by the historian John Kuo Wei Tchen, a co-founder of the museum, along with Cynthia Ai-fen Lee. It depends less on artifacts like the cap gun or the display of irons used by once-familiar Chinese laundry establishments than on the arc of the narrative.

One side of some galleries tells of struggle and hardship, showing images of the riots that led to the 1882 Chinese Exclusion Act, for example, in which unskilled Chinese immigrants were barred. Also on display are the crib sheets an aspiring immigrant once studied to convince officials at Angel Island (the San Francisco counterpart to Ellis Island) that he was more than a “paper son” whose false documents affirmed a connection to someone already in America.

The most fascinating galleries are compressed displays of how the image of Chinese-Americans was shaped into stereotypes in early 20th-century culture, ranging from Fu Manchu’s villainy to chop suey’s homogenized exoticism. The position of Chinese-Americans became still more complicated when China was an ally during World War II, a Communist enemy in the 1950s and a warily watched trading partner and political rival in the 1980s and ’90s.

The other side of the main gallery is dedicated to Chinese-Americans who succeeded in their fields despite the obstacles thrown in their path, like Dr. Faith Sai So Leong, the first female Chinese dentist in America, and Yan Phou Lee, the first Chinese student elected to Phi Beta Kappa, as well as contemporary Chinese-American luminaries like Secretary of Energy Steven Chu and cellist Yo-Yo Ma.

Not only is the collection fascinating (and ever-expanding), but the space itself looks beautiful. Here’s the entrance with video installations by Chinese-American artists on the walls: 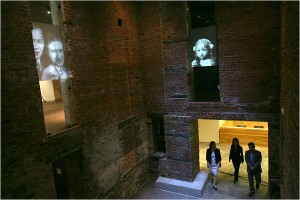 4 thoughts on “Museum of Chinese in America reopens in NYC”