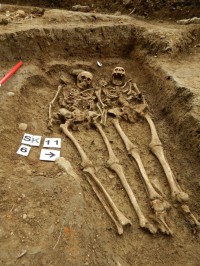 A team of archaeologists from the University of Leicester Archaeological Services (ULAS) has unearthed the skeletal remains of an adult male and female who are still holding hands 700 years after they were buried side by side. The lovers were found along with nine other individual burials at the site of a cemetery on the north side of the Chapel of St Morrell in Hallaton, Leicestershire. They human remains have been radiocarbon dated to the 14th century.

Built on the side of a hill that appears to have had sacred structures on it at least since the Romans, the chapel was a site of pilgrimage in Middle Ages, in use from the 12th century to the 16th. The last documentary evidence of the chapel as an active pilgrimage site is the 1532 will of Frances Butler, a Hallaton priest. He left all his worldly goods to another priest, Edmund Oliver, with the stipulation that he travel to four shrines to ensure the ideal disposition of Butler’s soul. “St Mawrell of Hallaton” was one of the four.

Sometime after that it fell into disuse. Eventually the chapel crumbled and its location was lost to memory. The hillside became the locus of an annual Easter custom called the Hare Pie Scramble and Bottle Kicking in which hardy men from Hallaton and the neighboring village Medbourne chase a wooden canteen down the hill and over a stream. The event begins on Hare Pie Bank, so named because that’s where the hare pie gets eaten before the bottle kicking begins.

A decade or so ago, local historian John Morison found a reference in a 1606 Glebe Terrier (a survey of parish lands that were income-generating parts of a clergyman’s benefice) that the “Chapel of St Morrill” was on or around Hare Pie Bank. The Hallaton Fieldwork Group (HFWG) did a geophysical survey of the site which found a square perimeter about 120 feet across with various architectural features inside. Together with ULAS and some local volunteers, they began excavating Hare Pie Bank.

This is the fourth year of excavations on the site. The tiled floor of the chapel has been unearthed, along with the remains of walls and lead from the windows. Coins were found dating to between the 12th and 16th centuries, confirming the documented period of activity. Underneath the chapel remains archaeologists found Roman remains, among them a square ditch that may be evidence there was a temple on the site. Given that the vast Hallaton Treasure

of more than 5,500 Roman and British coins, a silver bowl, ingots, jewelry, the complete skeletons of three dogs, the bones of more than 300 pigs consumed in a feast and an exceptional Roman cavalry parade helmet were discovered just a few hundred yards from Hare Pie Bank, it seems likely that this area has held ritual significance since before the Roman conquest.

So it makes sense, considering the hill’s long sacred history, that there would be a chapel built on the site. It’s not clear, however, why the small chapel had its own cemetery.

Vicki Score, ULAS project manager, said: “We have seen similar skeletons before from Leicester where a couple has been buried together in a single grave. The main question we find ourselves asking is why were they buried up there? There is a perfectly good church in Hallaton. This leads us to wonder if the chapel could have served as some sort of special place of burial at the time.”

The team believe the chapel may have been an area of pilgrimage. Alternatively, the bodies might have been refused burial in the main church, perhaps because they were criminals, foreigners or sick.

Further study of the skeletal remains might help explain their burial. So far, in addition to the lovers, one older male has been found with a wound from a sharp weapon like a pole axe on his skull that was probably what killed him. The teeth of a young man who was buried with his legs raised to his chest indicate that he experienced trauma as a little boy. He’s likely to have been felled by illness, and in fact there is a reference by a 17th century historian to Hallaton having been a holy place visited by flocks of sick people.