A team from the Autonomous University of Barcelona (UAB) excavating the Bronze Age archaeological site on the La Almoloya plateau in the southeastern Spanish municipality of Pliego have unearthed residential and government buildings and 50 tombs. The plateau’s steep slopes made it a highly defensible location that was occupied from 2,200 B.C. to 1,550 B.C. by the El Argar culture. The extensive construction and dense population point to La Almoloya having been an important political center 70 miles northeast of the Argaric capital of El Argar (modern-day Antas, Almeria).

Artifacts found inside the buildings were in excellent condition. Metals, ceramics, stone and bone survived alongside exceptionally rare textiles. The structures and their contents paint a picture of a rich urban environment that is unique in Bronze Age continental Europe.

The excavations indicate that the La Almoloya plateau, of 3,800 metres square, was densely populated and included several residential complexes of some 300 square metres, with eight to twelve rooms in each residence. The buildings’ walls were constructed with stones and argamasa [a kind of lime mortar], and covered with layers of mortar. Some parts contain stucco decorated with geometric and naturalistic motifs, a novelty which represents the discovery of an Argaric artistic style.

Among the discoveries made is a wide hall with high ceilings measuring some 70 square metres, with capacity for 64 people seated on the benches lining the walls. The hall includes a ceremonial fireplace and a podium of symbolic character. This unique building was used for political purposes and archaeologists consider that it must have been used to celebrate hearings or government meetings.

Archaeologists affirm that this is the first time a building specifically dedicated to governing purposes has been discovered in Western Europe, and believe that decisions were taken here which affected many of the region’s other communities.

The ceremonial hall is flanked by adjoining rooms. Because of its political significance and large size, archaeologists categorize this structure as a palace, and a highly advanced one at that, comparable only to near Eastern buildings from this era. 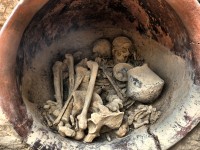 Another reason to deem the building a royal palace is a tomb that was found adjacent to the main wall of the government hall. It holds the skeletal remains of an adult man and woman who were buried with 30 artifacts made of precious metals and gemstones. The woman wore a silver diadem around her head, one of only five Agaric diadems ever discovered and none of the other four remain in Spain. They were found at the El Argar type site by Belgian mine engineers Henri and Louis Siret in the 1880s and are now in the permanent collection of the Royal Museums of Art and History’s Cinquantenaire Museum in Brussels.

The royal couple were also buried with four ear dilators, two of gold, two of silver, plus silver rings, earrings and bracelets. A bronze dagger had silver nails in the handle. These are rare and important examples of the advanced metallurgy of the El Argar culture. Two other pieces are uniquely significant on that score: a ceramic vessel with bands of finely layered silver and a punch with a bronze tip and a silver handle. Both of them are one of a kind objects that demonstrate the high level of Argaric silver craftsmanship.