Inspired by my recent foray into Swiss watchmaker automata, I decided to revisit one of my old favorites from the archives: the creepy Creeping Baby Doll. When I first posted about this monstrous hybrid of human baby and machine four years ago, it was within the context of the National Museum of American History’s extensive collection of robots which includes the patent model for a crawling (called “creeping” in the 19th century) baby doll patented in August of 1871 by one George P. Clarke. The only photograph of robobaby was a blurry black-and-white which while dissatisfying still managed to convey the disturbing incongruity of the baby face and limbs attached to a heavy mechanical torso.

The museum has lately expanded its online collection so now there’s a full entry dedicated to the Creeping Baby Doll patent model complete with a proper high resolution color picture. Feast your eyes upon her, I dare you! 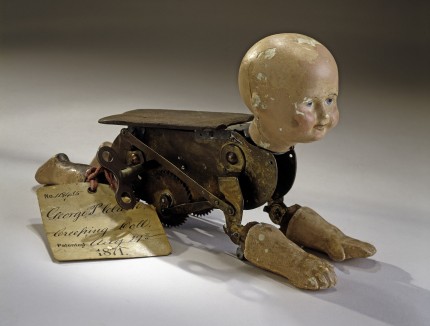 Now you can see her ice blue eyes and toothy grin which add a whole new dimension of horror. What’s that you say? You wish she were staring right at you, sucking your soul out through your uncontrollably slackened jaw? Done!

Temporarily satiated, she can now move on to her next victim, leaving your empty zombified body to shuffle behind her, another drone in her growing army. 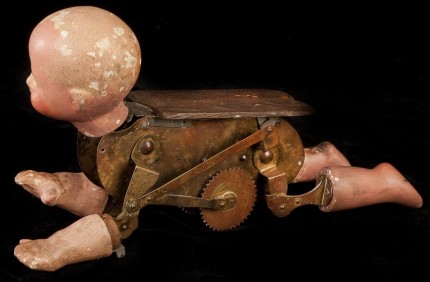 To be fair to George Pemberton Clarke, whose model was an improvement on one invented by his boss, Robert J. Clay, earlier that year, the final production toy was nowhere near as terrifying as the patent model. The National Museum of American History has one of those too, although they’re not certain when it was made.

You can just see the gear and wheels peeking out from under her belly and armpit, but all dressed up with her little bonnet she’s significantly less spine-chilling. Still not much of a cuddly toy for little girls to play house with, however. Indeed, she ultimately found a market as a novelty, one of a number of wind-up metal toys including Girl Skipping Rope and Toy Gymnast made by the Automatic Toy Works, a small New York mechanical toy company founded by Robert J. Clay.

In 1872, a year after the first Creeping Baby made her debut, he submitted a patent application for another so-called improvement to the design: the Crying Creeping Baby Doll. A projecting blade made of rubber or paste would strike the notches of a toothed wheel as it turned, thus producing a sound that Clay assures us is “in imitation of the crying of a child, or of an animal voice.” I like that baby and animal cries are entirely interchangeable, in his opinion. Sadly, I have been unable to locate a recording of whatever god-awful ululations this mechanism produced, or even any evidence that this version of the toy ever went into commercial production.

The non-crying Creeping Baby went on to have a long career. Clay’s company was in business from 1868 until 1874 when it was bought by Connecticut toy makers the Ives Manufacturing Company in 1874. Ives continued to produce automata under the Automatic Toy Works imprimatur for years after the acquisition, expanding the line with clockwork mechanisms that make the Creeping Baby look like the teddy bear from the Snuggle commercials.

This trade catalogue from 1882 has made the rounds of the Internets because of its wide array of painfully racist toys. Out of 17 toys on offer, seven are caricatures of black people, including a fiddling Uncle Tom and “The Woman’s Rights Advocate” who is unnamed but is an unmistakable reference to Sojourner Truth, the abolitionist and women’s rights advocate who had been born a slave in upstate New York and became nationally famous as an anti-slavery and gender equality advocate. Her 1851 speech “Ain’t I a Woman?” became a rallying cry for

abolition and the women’s rights movement. Two more toys are caricatures of the Chinese (doing laundry, of course) and one is an Italian Organ Grinder, who while stereotypical does not have the cringe-worthy exaggerated caricature features of the other racialized toys. He also plays music, unlike the fiddler, with a mechanism the catalogue proudly attributes to those masters of automata, the Swiss.

On the last page of that catalogue you’ll find the one, the only Wonderful Creeping Baby, “the best doll ever made.” She’s the second most expensive at $5 (the Organ Grinder runs $6, doubtless because of his Swiss music box) and her “resemblance to life is almost startling,” we are assured.

The Ives Manufacturing Company was the top producer of mechanical wind-up toys in the 1880s, but by the end of the century cheaper copycats were so widespread the business shifted to focus on toy trains. After a fire leveled the Ives factory in Bridgeport, Connecticut, in 1900, they rebuilt as a state-of-the-art toy train manufacturer. They were hugely successful, the largest toy train company in the country, until model railway makers Lionel overtook them in 1924. Four years later they were bankrupt and were eventually bought out by their rivals Lionel in 1933.

As for George Clarke, the patent office records his long career, before and after his foray into toy design. Here’s his 1857 application for first a new arrangement of steam boiler safety valves. Ten years later he was living in New York and was inventing more entertaining mechanisms like this extremely cool globe made of discs he called “zones” depicting the “animal, vegetable and mineral kingdoms of the earth.” That would have been just before the time when he worked with Clay at the Automatic Toy Works.

A decade after that his patents returned to more practical mechanisms, including this cane with an electric current in the head (1878) that would gently zap the hand wielding it. Although Clarke noted in the patent application that “the effect of a gentle galvanic current on the human organization is not in the present state of electrical and physiological science fully explained” but that doesn’t stop him from claiming it “functions as a battery for the relief or cure of diseases of the nerves.” As if that weren’t a sufficient selling point, the mechanism can be fitted inside the “handle of any portable tool or weapon, as a policeman’s club or the like, if desired.” Billy club and taser all in one. I’m amazed it never went into production.

17 thoughts on “Creeping Baby Doll is back…FOR YOUR SOUL”