In 1825, physician and obstetrician Dr. Augustus Granville performed the first modern scientific autopsy of a mummy. The 2,600-year-old Irtyersenu had been taken from the necropolis in Thebes and passed along to the good doctor, who performed an extensive 6 week autopsy then presented his findings in grand style in the Royal Society halls.

“I determined, perfect and beautiful as it was, to make it the object of further research by subjecting it to the anatomical knife, and thus to sacrifice a most complete specimen of the art of Egyptian embalming, in hopes of eliciting some new facts illustrative of so curious and interesting a subject,” Granville said.

In a dramatic flourish, Dr. Granville lit said halls with candles made from wax he scraped off the mummy. He thought it was a mixture of bitumen and beeswax used to preserve her. It turned out to be adipocere, ie, her own body fat broken down into a crumbly waxy substance.

So he described her corpulent figure, her remarkably intact soft organs, her pelvic bones that showed signs of multiple childbirths, her age at death (50 – 55), under the flickering light of her own fat.

He found a tumor on her ovary and declared it the cause of death, but Irtyersenu has had the last laugh after all, because with today’s technology, scientists have been able to demonstrate that in fact the tumor was benign, and it was tuberculosis that killed her.

Reporting on Wednesday in the Royal Society journal Proceedings B, scientists led by Helen Donoghue, a specialist in infectious disease at University College London, used hi-tech analysis to explore what might have happened.

Thwarted by the difficulty of obtaining a well-preserved sample of DNA, they took material from the bones and soft tissues and tested it with liquid chromatography, analysing it for chemical telltales.

The signatures point to biomarkers of the cell wall of Mycobacterium tuberculosis — the germ which causes TB. It was found in the lung tissue, pleura, diaphragm and femur.

Paleopathology studies done on other Egyptian remains suggest tuberculosis was common in Egypt at the time.

The quality of the art on her sarcophagus plus the fact that her internal organs remained in place instead of being placed in canopic jars suggests Irtyersenu was neither too poor to afford a quality burial, nor rich enough to be able to afford the top notch embalming procedures, so solidly middle class and easily exposed to any Mycobacterium tuberculosis going around. 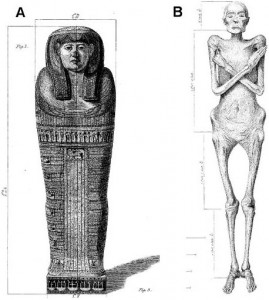 One thought on “Mummy Autopsy 2: The Revenge of Irtyersenu”