Before Urban Archaeology (UA) became a manufacturer of tiles, lighting, furnishings, bathroom fixtures, etc. based on period designs it was in the business of salvaging the originals. Even though it’s been decades since the primary focus of the company changed, Urban Archaeology still has thousands of architectural features of illustrious heritage salvaged from historic buildings like the St. Regis Hotel, the Paris department store Bon Marche, the Yale University Library, Place de la Concorde, the Chrysler Building and St. Patrick’s Cathedral.

At the end of the month, Guernsey’s auctioneers will be selling 6,000 of these salvage treasures at UA’s Franklin Street office. The auction will be held in two parts, part one on March 27th (catalogue here) and part two the next day (catalogue here). Follow the links to the catalogue entries to bid online.

Although the day one catalogue starts a little dry with pages of duplicate light fixtures, once you get past that hump it’s a wonderland for anyone who enjoys fantasizing about Frankensteining themselves up a house full of vintage features. Look at this enamel cast iron stove made by the Glenwood Stove Company around 1920. It runs on both gas and wood, with four gas burners, two wood burners, one gas oven and one wood-burning oven. Look at the white enamel handles to control the burners. Gorgeous and still in working order. Very useful for zombie apocalypse preparedness. The starting bid is $1,500 and the top estimated sale price is $4,000.

In the more affordable range, how about a 1940s bobsled? It’s handmade, hence the car steering wheel, but by someone who knew what they were doing because that is some quality bobsled construction. It seats four, too, so instant winter party. The high estimate is $500.

If it’s an actual piece of architectural history you’d like, look no further than this Art Deco pendant light from Chrysler Building, icon of Art Deco and of New York City since it was built in 1930. The Chrysler Building’s design is still inspiring artists and architects today. The brass and clouded glass pendant light used to hang over the building’s staircase. The opening bid if $4,000 with a top estimate of $12,000.

You could make practically build yourself a whole Grand Central Station with the spate of architectural features salvaged from iconic Paris department store Bon Marche, including iron balcony railings and curved glass ceiling panels by French Art Deco blacksmith Edgar Brandt. Then you can mix it up by adding two cast iron mermen and one cast iron mermaid made by sculptor Jacques Hittorff in the 1830s for the fountain in the Place de la Concorde. The fountain is still in place in Paris but the sculptures there are replicas. The originals can be yours for just an estimated $150,000 each.

How about a public clock or two to decorate your new gigantor Frankenpalace? I’m partial to this Reed & Stern train clock from Union Station, Troy, NY, made in the early 1900s. It’s made of white terra cotta and glazed in a handsome malachite green. I am completely in love with the locomotive charging out of a tunnel through its own steam cloud above the clockface. I also heart the Karl Flugel iron tower clock from 1878. It used to keep time in a German tower but now stands a new iron base with the mechanical version of its swimsuit area exposed to our fixed stares.

Another architectural gem of illustrious pedigree is these St. Patrick’s Cathedral wrought iron gates made around 1880, possibly by Arts and Crafts decorative ironwork master Samuel Yellin. They were installed at the cathedral’s 51st Street and Madison Avenue corner at the entrance of the baptistery. In the 1980s the baptistery was moved and the gates found a new home at Connecticut museum of master metalsmith Kenneth Lynch. Lynch has decided to donate his museum collection to Xavier High School and is putting the gates up for sale with the proceeds benefitting St. Patrick’s.

If you prefer your entrance areas to have fewer holes in them, consider these gorgeous Art Deco nightclub doors from around 1940. They’re wood painted in a metallic silver and the circular pattern is mesmerizing. 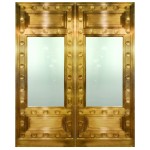 But they’re flimsy little sticks compared to these 1910 brass pocket doors salvaged from the United States Assay Office in lower Manhattan. Not only do they look badass, but they have the badass history to support the look. The doors weigh 1500 pounds each and were used to secure precious metals in the last public gold refinery in the country (it was shut down in 1982, its gold refining duties contracted out to private concerns, the building and its fixtures sold at auction in 1983). Until the day it was shut down, the Assay Office and its sturdy doors protected 4,140 bags of gold coins confiscated from the Nazis in World War II and more than 100,000 28-pound gold bars. Even the horse-drawn cart bomb that exploded in the Financial District on September 16, 1920, killing 38 people, injuring hundreds and taking large chunks that are still visible on some of the building facades couldn’t scratch these doors.

Seeing catalogues like this ignites the secret hoarder within me. No I cannot have enough cast iron planters, large Art Deco skylight ceiling panels and train station clocks, thank you very much. I DON’T CARE IF WE HAVE NO PLACE TO PUT THEM.