Two rare hand-inked and hand-painted production cels from the classic 1957 Warner Brothers cartoon What’s Opera, Doc? in which Bugs Bunny and Elmer Fudd exposed many children to the first and possibly only Wagner arias they’d ever known, will be going under the hammer at Heritage Auctions on April 9th, 2015. Only a handful of cells from this instant classic have survived the callous treatment they received in their time. These two have the advantage of being iconic images and having been rescued by a legendary animator who has kept them safe at home for all these decades.

What’s Opera, Doc? was directed by Chuck Jones (legend), voiced by Mel Blanc (legend) as Bugs with animation by Ken Harris (legend). Just six minutes long, the cartoon took seven weeks to produce, two weeks more than scheduled. Jones was so committed to this story that he made his crew falsify their time cards to say those extra two weeks were spent on a Road Runner cartoon that wasn’t in production yet. “For sheer production quality, magnificent music, and wonderful animation,” Jones said, “this is our most elaborate and satisfying production.” His instincts were unerring. Voted number one of the 50 Greatest Cartoons of all time by 1,000 members animators in 1994, What’s Opera, Doc? was also the first cartoon Congress deemed worthy of preservation in the National Film Registry in 1992.

One lot captures Elmer in his Siegfried outfit lifting up Brünnhilde Bugs during their dance inspired by the Bacchanal ballet in Richard Wagner’s Tannhäuser. It’s seven inches tall and while there is some paint loss and paint separation, it’s still graded in Good condition. 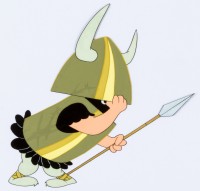 The second cel is from the beginning of the cartoon and features Elmer as Siegfried holding on to his helmet and spear. It’s 6.5 inches square and only has slight spots of paint separation in the horns and spear. There is no paint loss so it’s graded in Very Good condition. Both cels have pre-sale estimates of $5,000 and up.

The animation cels were saved from the dustbin of history by another animation legend, Jerome Eisenberg, who worked as an animator on Jones’ unit at Warner Bros. in the mid-to-late-1950s, the Golden Age of Looney Tunes cartoons and who has held on to the cels for almost six decades.

“It was special to me to work in his unit,” said Eisenberg. “We had tremendous fun.”

One afternoon, to the best of his recollection, he was in one of the artists’ rooms, or in the room of the unit’s layout man, when he saw a group of cels on a table. The art appealed to him and, knowing that most animation art was simply stored and eventually trashed, he took a few.

“In those day I never thought much about saving them,” he said. “I really just saved them for the artwork.”