Last summer, archaeologists excavating an Iron Age settlement on the Baltic island of Bornholm, Denmark, unearthed a rare enameled brooch in the shape of an owl. The excavation of the Lavegaard settlement on the outskirts of the town of Nexø was carried out in advance of construction of a daycare center. The archaeological team from Bornholms Museum has found large quantities of pottery, the remains of workshop ovens, hearths, clay and daub construction, traces of iron smelting and ceramics firing and more than 1,300 postholes. The owl pin was found by metal detectorists working with the archaeologists a few meters from an ancient home in the Roman Iron Age layer. Its design and composition date it to the middle of the 1st century through the end of the 3rd century A.D. 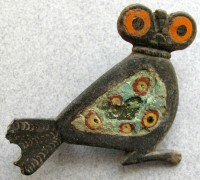 The owl’s most prominent features are its huge round eyes with bright orange irises around a black pupil. Its body has a wing decoration filled with green enamel inset with five circles, each containing concentric rings of red, yellow and black. The bird’s tail feathers are marked with semi-circular indentations and its neck is encircled by a rope design. All the colors are made of enamel.

The artifact is a plate or disk fibula, a pin used to fasten garments made from a flat disk that could be shaped into a variety of designs, including zoomorphic ones. It was made of bronze and decorated with multi-colored enamel accents. The enamel in the piece was created by applying various colors of powdered glass onto the glass rods you see in millefiori designs (that’s how those concentric circles in the eyes and on the body were made) and then firing the brooch until the powder fused into enamel. The technique used to make the owl so colorful is known as pit enamel because the surface of the enamel becomes uneven upon subsequent firings done to harden the enamel.

Roman enamel came in a variety of colors — orange, red, azure, dark blue, green, yellow, white, black — but it rarely survives in brilliant condition. Many enameled fibulae found today have seen their colors fade or change into a yellowish brown. The owl’s colors are still diverse and bright because it was preserved by archaeological layers topped by a thick clay sealing layer. Also, the area was not ploughed anytime in the recent past which saved the little owl from being churned up and potentially damaged by heavy equipment.

While enameled fibulae do not appear to have been very popular north of the Germanic border — Scandinavia had excellent artisans of its own, particularly metalworkers, and the fashion was to leave metal jewelry as is rather than putting lots of color on it — more of them have been found on the island of Bornholm than anywhere else in Scandinavia, about a dozen of them so far. This is the only owl fibula known to have been found in Scandinavia. They’re rare anyway, and the few that have been found were unearthed in German frontier forts or closer to the heart of the empire in what are today Belgium, France, Italy, Austria and Switzerland.

Somebody must have loved this colorful owl, perhaps appreciating its rare design or symbolic significance, enough to take it home. Archaeologists believe it was likely to have been brought to Bornholm by a mercenary returning from a stint in the Roman army rather than openly traded.

Owls have a keen sense of night vision, enabling these highly skilled silent hunters to catch their prey unawares. This notion of owls as intelligent and wise animals is one that has endured throughout the ages as famous companions to both Athena, the Greek Goddess of war, and later to Minerva, the Roman goddess of wisdom, art, trade, and war.

In fact, Minerva was often depicted with an owl on her shoulder as a symbol of wisdom, making it a highly desirable animal for a Roman soldier.

We do not know if the Germanic perception of the owl was the same as the Romans, but many of them would have been mercenaries in the Roman territories and developed a deep insight into the Roman mentality and culture. It is likely that they also adopted Roman traditions of symbolic jewellery.

The brooch must have been something quite special at the time, both because of its unusual shape and bright colours. It must have given the wearer a great level of prestige.

In Danish the word for owl fibula is uglefiblen which is, I think we can all agree, extremely adorable. The uglefiblen is now on display at the National Museum of Denmark along with other treasures discovered in 2014.