H.G. Wells first published his groundbreaking alien invasion story The War of the Worlds in serialized form in Pearson’s Magazine from April to December of 1897. The next year the first edition of the complete novel was published. It was an immediate success. Translated editions in Dutch, German, Polish, French, Russian and Italian followed in close succession, as well as several other English language editions, and while some of them had a smattering of graphic elements — the occasional tripod on the cover or title page — the first fully illustrated edition wasn’t published until 1906. It was this expensive special edition of only 500 copies that would influence the depiction of Wells’ creations for the next century.

The illustrator was Henrique Alvim Corrêa, a Brazilian artist who lived a short but intense and productive life. Alvim Corrêa was born in Rio de Janeiro in 1876 to a wealthy family. His father, a prominent lawyer, died when he was seven years old. His mother was remarried to banker José Mendez de Oliveira Castro in 1888, and in 1892, when Alvim Corrêa was 16 years old, the family moved to Lisbon before settling permanently in Paris a year later. In 1894 at the age of 18, he began his formal instruction in art under military painter Édouard Detaille. Military themes had been extremely popular in French art since the Franco-Prussian War (1870-1871) and Henrique followed in his master’s footsteps, exhibiting well-received military pieces in the Paris Salons of 1896 and 1897.

In 1898 Alvim Corrêa suddenly quit his studies, and against the wishes of his family married 17-year-old Blanche Fernande Barbant, daughter of engraver Charles Barbant, who was himself a successful illustrator of books by Jules Verne, among other authors. The newlyweds moved to Brussels and had their first child late that year. Cut off from his family’s financial support and connections in the art world, Alvim Corrêa had to scrape together whatever commercial work — advertisements, house painting — he could find to make do. By 1900 his finances were stable enough that he was able to move his family to the suburb of Boitsfort where he opened a studio.

Still little known as an artist, Alvim Corrêa hustled like crazy to get his work out there. He developed a style of strong contrasts and dynamic movement in drawing and painting, exploring surreal dreamscapes, caricatures, figures in action (military men, working women), landscapes real and fictional, themes of eroticism and violence individually and in combination. In 1903 he read The War of the Worlds and was inspired to draw his vision of Wells’ Martians which fit so handily with the recurring themes in his private work. Entirely unsolicited, Alvim Corrêa took his handful of drawings to London and showed them to Mr. Wells, who didn’t know him from Adam. The author was so impressed with the artwork that he invited Alvim Corrêa to illustrate the upcoming special edition of The War of Worlds by Belgian publisher L. Vandamme.

Alvim Corrêa returned to Boitsfort where he spent two years working on the illustrations. At the same time, he organized a solo exhibition of his own work which opened in 1905 and garnered him significant buzz. He went back to London that year to show Wells the finished group of 32 drawings. Wells loved them and in 1906, L. Vandamme published the large format luxury illustrated French edition of The War of the Worlds. Each of the 500 copies of the special edition was numbered and signed by Henrique Alvim Corrêa. Wells would say of the illustrations: “Alvim Corrêa did more for my work with his brush than I with my pen.”

Unfortunately his busy 1905 also included several months spent in Switzerland where he had surgery in the vain attempt to stop the tuberculosis that was laying waste to his lungs and intestines. He recovered from the surgery but not from the TB. That powerful drive of his could not overcome tuberculosis. He had to slow down his hectic work schedule considerably, but even a slowed down Alvim Corrêa continued to produce unique art, like Visions Erotiques, a collection of 20 erotic drawings entwining sex and death that he published under the pseudonym Henri Lemort (Henry the dead) in 1908. In 1910 he put together another exhibition of his work, this time alongside other artists’ pieces.

Working until the very end, Alvim Corrêa died in 1910 at the age of 34. He remained virtually unknown, even in his own country, outside of a small circle of rare book collectors and Wells connoisseurs. In the early 1970s Brazilian art historians brought him back into the light as a native son of great talent and innovation. Over the following decades his work, especially the Wells drawings, went on display at museums all over the country. His original drawings for The War of the Worlds remained in his family until 1990 when 31 of the original 32 were sold to a private collector, along with a poster announcing the special edition and a charming note Wells wrote to Alvim Corrêa in November of 1903 in which he told him he was “very glad indeed you like my Moon Men.”

That entire set is now on sale again at Heritage Auctions. Each piece is being sold in individual lots, with the letter being the least expensive at an estimated sale price of $500-$700, which is basically its autograph value. The estimate for the poster is $3,000-$5,000. The illustrations range from $5,000 to a high range of $25,000 for the title page. The collection all together could take in $500,000.

Such a shame it’ll be broken up, though. I hope some proper nerd buys the whole group and donates or loans it permanently to a museum. The 31 original artworks, poster and letter were displayed at the Science Fiction Museum and Hall of Fame’s inaugural The War of the Worlds exhibition in Seattle, Washington, from October 2004 to October 2005. That was the first (and last, as far as I know) time Alvim Corrêa’s drawings were exhibited in the United States. The museum is the passion project of Microsoft co-founder Paul Allen, who could light his cigars with half a million dollars and has repeatedly proven himself unafraid to pour money into his love of history. 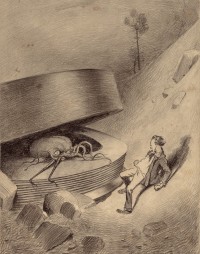 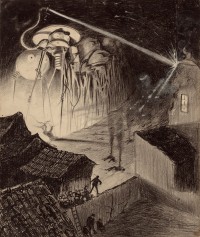 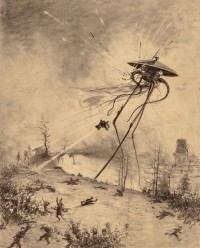 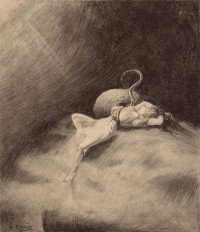 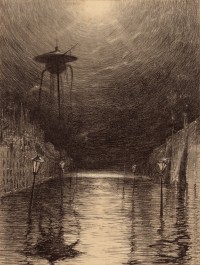 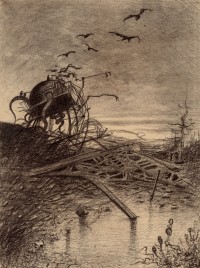 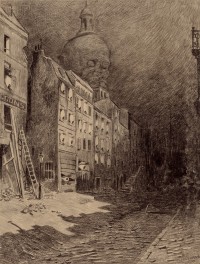 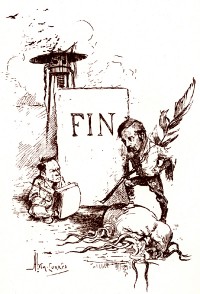