Asterix, that indomitable little Gaul, is 50 today, as are his comrades-in-arms from the one village that resists being divided into three parts by Julius Caesar. Asterix got his big break in the magazine Pilote exactly fifty years ago today.

His creators, illustrator Albert Uderzo and writer Réne Goscinny, published the first book, Asterix the Gaul, two years after that, and basically never stopped. Even after Goscinny’s death in 1977, Uderzo continued to crank out the best-selling books. Asterix books have sold 325 million copies and been translated into 107 languages.

Not to universal acclaim, I’m afraid. I’m not a purist, but there’s no question that the books lost some of their brilliant puncraft and wit when Goscinny passed away. The first 24 books are by far superior to the ones that came after.

Asterix and Cleopatra is my forever favorite, but I cherish all the precious English translations from my youth. They never lost their luster even after I learned enough French to get the originals. Anthea Bell is the translator. There’s a great interview with her here.

Ironically perhaps, Asterix in Britain was a particular challenge to translate because one of the joys of the original was the way in which Goscinny captured the British characters speaking French with a dreadful English accent. It is also a favourite of Uderzo.

“While I like all that we have made, I have a little preference for Asterix et Les Bretons, for the way that René made the British speak with the structure of the English language transformed into French. I found it an extraordinary idea,” he says. “For René, who knew English perfectly, it was like a child’s game”.

Bell, who always ran her scripts past Goscinny when he was alive, was relieved to find that her translation solution – to use very dated, stilted, ‘upper class twit’ language in the style of PG Wodehouse – met with the French writer’s approval. “I told him that we were intending to use phrases like ‘what ho, old bean!’ and ‘hullo, old fruit’ and his eyes lit up,” she said. “‘Vieux fruit! I wish I’d thought of that…’ he murmured.”

He may belong to the world now, thanks to great translators like Ms. Bell, but Asterix is an undeniable French icon, celebrated as an incarnation of the rebellious, stubborn, self-confident French national character. Paris has gone Asterix-mad this anniversary.

They’ve had all kinds of Asterix-themed events, including a sky drawing of the little Gaul done by an elite Air Force unit (video of the aerial stunt), a 50th anniversary book release which is a collection of Goscinny short stories rather than one full-length book. There’s even a musical called “Le Tour de Gaule d’Asterix” by Parisian composer Frédéric Chalin staged at Champs Elysees Theatre.

Parisians are to be besieged by tributes to France’s most popular comic strip. Today, among the third-century Gallo-Roman baths upon which the Musée de Cluny is partially built, an exhibition of original plates and manuscripts opened to allow fans a glimpse of the creators’ inspirations. […]

To add to the Astérix fervour gripping the capital, various symbols of the books such as giant menhirs … and speech bubbles of famous exchanges will be erected at eight locations including the Place de la Concorde and in front of the Eiffel Tower.

Update: Oh yay, a slideshow! The menhir with faux hieroglyphics is just adorable.

The Musée de Cluny doesn’t have much of a website, so those of us not in Paris today will have to be content imagining the thirty original plates by Uderzo and the handwritten and typed scripts by Goscinny set in what was once a Roman frigidarium.

There are also new parodies by Uderzo of famous French artworks done Asterix style on display in the Cluny gardens. Here’s “Impedimenta Leading the Gauls” after Eugène Delacroix’s “Liberty Leading the People”: 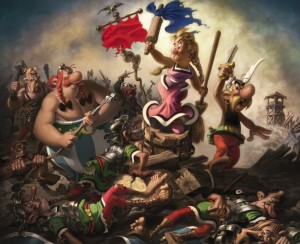