Buzz Aldrin, who you might know from his outstanding guest starring roles in the classic Deep Space Homer episode of The Simpsons and in that 30 Rock where he and Liz Lemon yell at the moon, also did this other thing once where he was the second human being to walk on the moon. In addition to being a history-making space pilot, explorer of new worlds and a reliably phenomenal cameo, Aldrin also doth bestride the narrow world of Facebook and Twitter like the Colossus. Today he allowed we petty men to walk under his huge legs and peep about at the marvels of space travel bureaucracy.

Behold, Buzz Aldrin’s travel voucher for his trip to the moon aboard Apollo 11: 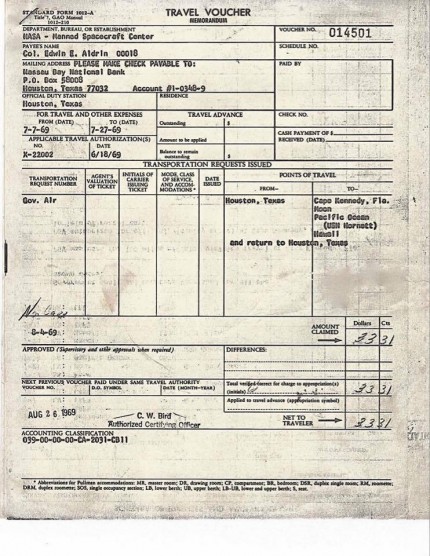 Please note the “points of travel” entry that records Colonel Aldrin’s departure and arrival spots from Houston, Texas, to Cape Kennedy, Florida, to Moon, to Pacific Ocean and the USS Hornet, to Hawaii and then back to Houston. It’s so deliciously dry.

Equally delicious and equally dry is the expense reimbursement form: 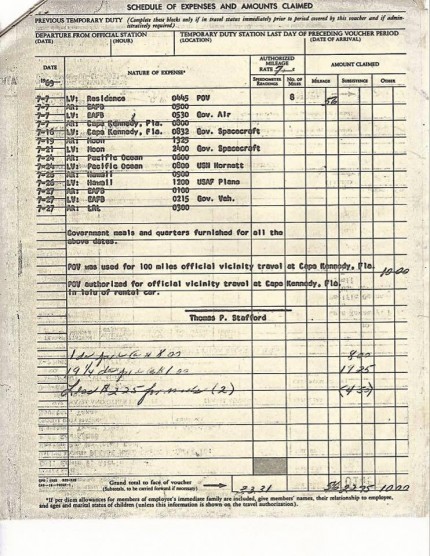 If there is a more bureaucratic way to describe a Saturn V rocket than “Gov. Spacecraft,” I don’t know what it is. Also, lol @ “Government meals and quarters furnished for all the above dates.” Tang, baby! (Not really. Tang wasn’t used on Apollo missions, but it was on some Mercury and Gemini missions. Buzz Aldrin, who piloted Gemini 12, is not a fan. The Apollo 11 astronauts actually had quite fancy meals, including shrimp cocktail, bacon, coffee, chicken stew, ham sandwiches and bite-sized brownies.)

Because Buzz (if that’s his real name) is the greatest, he interacts with people on social media (it is essential to read the comment threads on Facebook and Twitter for more Aldrin gems) and responds to questions. After he posted his travel voucher, Aldrin was asked if he had to fill out a customs form for the samples they brought back from the moon on Apollo 11. The answer, of course, is yes. 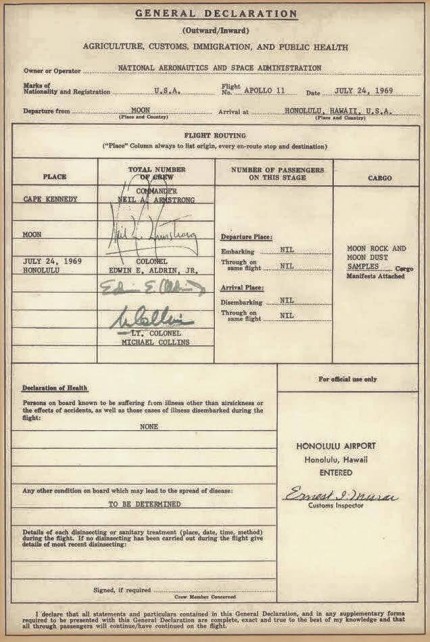 Cargo: moon rock and moon dust samples. I wonder what Honolulu airport Customs Inspector Ernest J. Messer (?) thought when he signed off on that form. The declaration of health section is interesting too, namely how under “any other condition on board which may lead to the spread of disease” they wrote “to be determined.” They determined there was no other condition on board by quarantining Neil Armstrong, Buzz Aldrin and Michael Collins for 21 days.

And now, here is Buzz Aldrin making a ham spread sandwich on the lunar module:

7 thoughts on “Buzz Aldrin’s travel voucher to the moon”