A painting in the Royal Collection has been hiding a man captured in the moment of answering a call of nature for more than a hundred years. A Village Fair with a Church Behind by 17th century Dutch painter Isack van Ostade is a vibrant, bustling scene of peasants exploring market wares in a fictional village under the shadow of an unrealistically large church. Restorers were cleaning the oil-on-canvas work in preparation for an upcoming exhibition when they found that a shrub in the bottom right corner was a relatively recent overpainting. When they removed the bush, they found a man popping a proverbial squat, trousers down, head bent in concentration.

Here is the painting before cleaning: 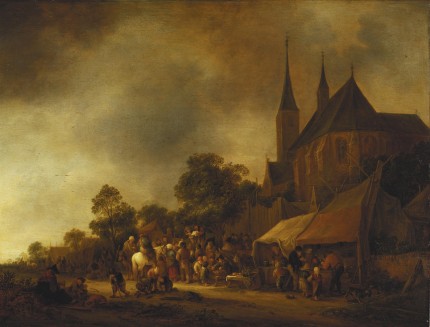 Here it is after cleaning: 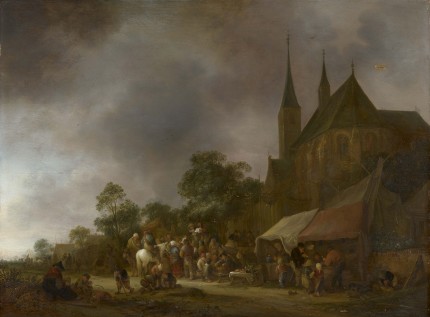 The canvas entered the Royal Collection in 1810 when it was acquired by the future King George IV, then the Prince of Wales. It hung in Carlton House, the Prince’s London home. Exhibition curator and surveyor of The Queen’s Pictures Desmond Shawe-Taylor notes that the notoriously dissipated “George IV loved that kind of thing … Being a man of the world, [he didn’t] mind a few rude jokes.” His successors were not quite so enamored of toilet humor. Restorers believe the rustic pooping fellow was probably painted over the last time the canvas was restored in 1903, after it was moved to the Picture Gallery at Buckingham Palace.

The modification took place two years into the reign of Queen Victoria’s son, Edward VII, who was himself was no stranger to bawdiness. Dubbed Edward the Caresser by Henry James, he was a regular at a number of exclusive Parisian brothels, particularly Le Chabanais where he kept his custom-made sex chair. He wouldn’t have had any direct involvement in the pooper cover-up. It was likely a curatorial decision to bring the painting in line with the proprieties of a time when the mere discussion of a much-needed women’s public lavoratory took five years because council members couldn’t even talk about bodily functions without terminal monocle popping. Displaying a painting of a man dropping a deuce next to a church, no less, would have been cause for great consternation. Another ribald Dutch painting bought by George IV, A Village Revel by Jan Steen (1673), was altered around the same time when a man’s naked buttocks on the tavern sign were covered with a bull’s head.

“Dutch artists often include people or animals answering the call of nature partly as a joke and partly to remind viewers of that crucial word ‘nature’, the inspiration for their art. Queen Victoria thought the Dutch pictures in her collection were painted in a ‘low style’; two years after her death perhaps a royal advisor felt similarly.”

The painter of A Village Fair with a Church Behind, Isack van Ostade, was born in Haarlem in 1621. He was trained by his older brother Adriaen who had a strong influence on his early works. Once he struck out on his own in 1642, Isack shifted his focus from the rustic interiors that characterized his brother’s work to peasant genre works set in a detailed but fictional landscape. He specialized in winter scenes and crowded exteriors, like the series of paintings he did of people milling about outside roadside inns. His signature touch in these busy scenes full of people and animals was a white horse, unmissably luminescent in the center left of A Village Fair with a Church Behind. Isack died at the tragically young age of 28. His short life was a prolific one; he completed about 400 paintings in the decade he had.

The painting is one of 27 Dutch 17th and 18th century works from the Royal Collection that will be on display in Masters of the Everyday: Dutch Artists in the Age of Vermeer, an exhibition exploring the quotidian captured in rich detail by artists like Jan Steen and Johannes Vermeer. The exhibition runs from November 13th, 2015, to February 14th, 2016, in the Queen’s Gallery at Buckingham Palace.