… he sail’d on the Quedagh Merchant. He left it behind in the Caribbean when he went to New York to clear his name (instead he was turned in by one of his investors and sent off to face the gibbet music in England), and now, the Quedagh Merchant seems to have been found near Catalina Island off the southern coast of the Dominican Republic.

Kidd left the Quedagh Merchant in the hands of a merchant called Henry Bolton, but the vessel was plundered and set ablaze and allowed to drift for 3 nautical miles to where it now lies below the waves.

After inspecting the wreck, Mr Beeker said said that it appeared to be a ship that was scuttled. Particularly significant are the barnacled cannons, which he believed were stacked in the hold when Kidd moved from the Adventure Galley to the Quedagh Merchant. “What you have is cannon stacked in the cargo hold in opposite directions,” he said. “This was not a wreck. There are no deployed cannons.”

There is also an empty area in the middle of the hold that might have contained 70 tons of sugar that was part of the ship’s cargo.

“As an archaeologist, I cannot say conclusively that it’s Captain Kidd’s ship, but as a betting man, I am betting on the ship,” Mr Beeker said. “The age of it is right; the stacking of the cannons; the missing section where the sugar may have been; no deployed cannons. Everything is adding up right. It’s his ship.” 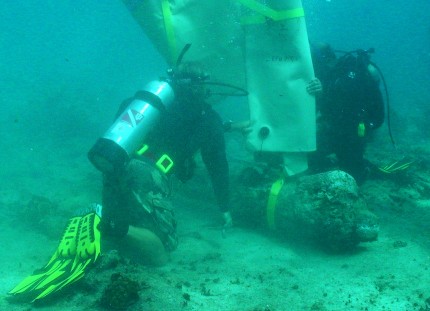