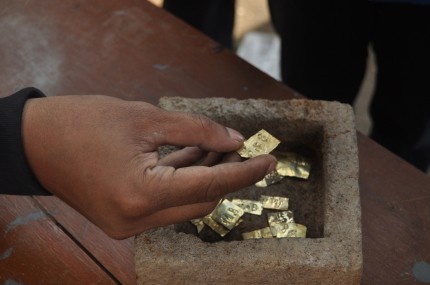 Construction workers in the Indonesian province of Central Java have unearthed 22 inscribed gold plates from the 8th century. The crew was digging for an aquifer project in the village of Ringinlarik when they came across a stone box in a rock pile. A small container at 14 centimeters (5.5 inches) long, 13.5 centimeters (5.3 inches) wide, and six centimeters (2.4 inches) high, the box was intact with its lid still on — one of the workers thought it looked like a jewelry box — and its contents apparently undisturbed.

Gutomo, an official with the Central Java Heritage Conservation Agency (BPCB) confirmed the gold found was 18 carats. Each plate has an inscription in ancient Javanese letters. The inscriptions are names of cardinal and ordinal directions of Dewa Lokapala’s wind Gods.

The inscriptions are names of cardinal and ordinal directions of Dewa Lokapala’s wind Gods.

“We recorded eight names of wind Gods. We have also declared the location as a heritage site,” Gutomo said.

Dewas, also known as devatas or dewatas, are minor Hindu deities that govern specific areas of nature and humanity. The Devata Lokapala are the Guardians of the Directions, overseers of the four cardinal points — Indra (east), Yama (south), Varuṇa (west) and Kubera (north) — and four ordinal points — Agni (southeast), Nirṛti (southwest), Vayu (northwest) and Īśāna (northeast). Javanese Hinduism includes a ninth member of the party, representing the center point, and calls them the Dewata Nawa Sanga, or Nine Guardian Gods.

The Guardians are often found painted or carved on the walls and ceilings in Hindu temples, but Java has an even stronger historical connection to these deities because they appear on the Surya Majapahit, a symbol associated with the great Majapahit Empire which ruled over what is now Indonesia from 1293 to 1500. (Old time readers might recall the wonderful Majapahit piggy banks made centuries before pigs became a popular home savings motif in the West.) The Surya Majapahit has been found carved on many Majapahit structures, enough that archaeologists believe it was an emblem of the empire. It’s an eight-pointed star representing the rays of the sun with the major Hindu deities in the circular center and the Guardians on the outer perimeter next to the rays that point in the cardinal or ordinal direction they guard. The plates predate the Majapahit Empire by at least five centuries so they’re not related, but they do attest to the regional significance of the deities.

It’s not clear on what grounds the gold plates have been provisionally dated to the 8th century, but one big clue is a discovery made at the same work site earlier this year: the remains of a candi, the Indonesian word for a stupa, a Hindu or Buddhist temple. The use of volcanic rock and the structure of the temple indicated to archaeologist that it was younger than the Candi Prambanan, a 9th century Hindu temple about 40 miles southwest of Ringinlarik. Metal plates inscribed with incantations and prayers were placed in containers and buried under the foundation of temples along with other offerings to bless the temple, so it’s highly probable these 22 plates were in place when construction on the candi began.