Five of the 24 paintings stolen from the Westfries Museum in Hoorn, northwestern Netherlands, on January 10th, 2005, have been returned to the Netherlands by the Ukrainian authorities. How they ended up in Ukraine is unclear. Museum officials searched constantly for their purloined works — 17th and 18th century oil paintings by Dutch masters and 70 pieces of silverware — for years before finally spotting a picture of one of the paintings on a Ukrainian website in 2014.

In July of 2015, two members of the ultra-right Organization of Ukrainian Nationalists (OUN) militia contacted the Dutch embassy in Kiev claiming that their battalion had all 24 of the stolen paintings and all the silverware. They claimed to have found the loot in the villa of one of their political enemies, a crony of the former president, and were willing to sell it back for an astronomical sum based on their groundless assumption that the art and silver were worth 50 million euros, a figure more than 50 times greater than the realistic assessment of expert appraisers.

The museum got the Ukrainian police involved, then the Foreign Ministry, then diplomatic talks ensued. No progress was made. When in December of last year they heard that the militia were looking for other potential buyers, museum officials notified the media and the whole crazy story made international news.

Since then, all kinds of under-the-radar things have been happening. Seemingly out of nowhere and with little explanation of the turn of events, in April of this year four of the 24 paintings were recovered by the Ukrainian secret service (SBU). They announced at a press conference that the recovery was the result of a special operation conducted in 10 regions of Ukraine over the course of four months, but no details were forthcoming about who had them or any legal repercussions for the thieves. All they said is they were found “in the possession of criminal groups,” which yeah, duh.

The four recovered works were The Peasant Wedding by Hendrick Boogaert, Kitchen Piece, by Floris van Schooten, The Return of Jephta and Woman World, both by Jacob Waben. These were the most prized of the stolen paintings and the museum was excited to get them back, especially since curators were concerned about their condition. Two of the paintings were still rolled up after having been cut out of their frames in the heist. Two others had been reframed.

Despite all the publicity about this caper and the artworks, the Ukrainian government dragged its heels about returning the paintings to the Westfries Museum. Officials decided they had to launch their own investigation of the pieces and who the legitimate owner was. The museum had supplied the authorities with ample documentation of their legal claim, which was doubted by nobody, not even the militia members themselves who had reached out to them directly, after all.

Then, in May, a fifth painting emerged, New Street in Hoorn by Izaak Ouwater. This one was handed in to the Dutch embassy in Kiev by an unknown buyer who apparently did not realize it was stolen when he purchased it. Again, no details were forthcoming.

Finally whatever kinks needed working out were worked out and on September 16th, all five of the paintings were formally returned to the Netherlands in a ceremony at the Dutch embassy in Kiev. Museum experts examined the works to authenticate them and assess their condition. The news for some of the works is grim. 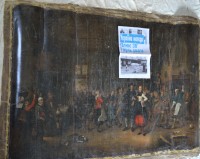 [Museum director] Ad Geerdink: “Naturally I am very pleased about the return. But I am very sad about the condition of the paintings A Kitchen Scene by Floris van Schooten and A Peasants Wedding, by Hendrick Boogaert. For years, the paintings have been moved all over the place and they were folded or rolled up. They really suffered a lot. When unrolling them, a piece came loose. Luckily they can still be restored, but it will be a time-consuming effort. The costs will be significant, at least 100,000 Euros. As a museum, we are not able to bear these costs ourselves. We therefore hope that people will help us with the restoration by joining the crowd funding campaign. We will start the crowd funding when the paintings return to Hoorn. In the spring of 2017, we want to let the paintings shine again in full glory in the Westfries Museum.’

The paintings will be back on Dutch soil on October 7th and the museum is planning to welcome them with much happy fanfare. The five works will be briefly on display starting on October 8th and admission will be free for a week so the people of Hoorn can welcome back their long-lost prodigals.

I will post an update when the crowdfunding campaign is launched.