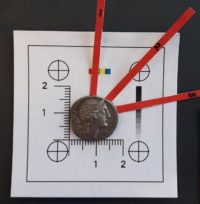 A study of Roman coins has discovered a significant shift in the source of the silver in the early 3rd century B.C. from Greece and its former colonies in southern Italy to the Iberian Peninsula. German and Dutch researchers took samples from 70 silver coins minted between 310 and 101 B.C., drilling minute holes in the rims of the coins to access unweathered heart metal. The samples were subjected to geochemical analysis to determine their metal composition. The team was able to determine the quantities and proportions of major elements (identified by an electron probe microanalyzer or EPMA), trace elements (identified using Laser Ablation Inductively Coupled Plasma Mass Spectrometry or LA-ICP-MS) and lead isotope signatures (identified using a Multicollector-Inductively Coupled Plasma Mass Spectrometer or MC-ICP-MS).

The lead isotope values of Roman silver coins before 209 B.C. largely overlap with coins minted in Magna Graecia from silver ore mined in the Aegean and Rhodope Mountain regions. The study found that the majority of coins minted after 209 B.C. were made from silver mined in the southern Iberian peninsula, source of the richest silver mines in the Mediterranean. The post-209 B.C. coins also have a higher silver content, greater than 96% by weight.

These findings are evidence of a massive shift in wealth from Carthage to Rome during and after the 2nd Punic War (218-201 B.C.). That 209 B.C. would be a demarcation line is no coincidence. Rome’s first attempt to relieve Carthage of its Iberian territories in 211 B.C. had failed miserably with the defeat of brothers Publius Scipio and Gnaeus Scipio in the battles of Castulo and Ilorca.

Their humiliation would be redeemed two years later by Publius’ son Scipio Africanus. He did what his father and uncle could not do and conquered Qart Hadasht (the Carthaginian name for the city of Carthage), modern-day Cartagena, a Mediterranean port city founded in 227 B.C. by Hasdrubal the Fair as the jumping off point for the Punic conquest of Spain. More than a century later, it was still the seat of Carthaginian power on the Iberian peninsula. By taking Cartago Nova, as Scipio renamed it, Rome hobbled Carthage’s control of the southeast. The loss was compounded in 208 B.C. when Scipio Africanus defeated Hannibal’s brother Hasdrubal at Baecula. Scipio broke the last of Carthage’s power in Iberia in 206 B.C. when he defeated an allied army of Carthage and Numidia at the Battle of Ilipa.

Cartago Nova had massive silver mines and indeed would go on to provide a constant supply of silver for the late Roman Republic and Roman Empire for centuries. Between Scipio’s successful conquest of Carthage’s silver-rich southern Iberian territories, war booty and, after the cessation of hostilities, the forced payment of punitive reparations, Rome was newly in possession of enormous silver resources. It wasted no time in converting them to cold hard cash.

Dr Katrin Westner, of the Institute for Archaeological Sciences at Goethe University, Frankfurt, one of the leaders of a group of scientists in Germany and Denmark that carried out the research, said the effect on the Roman empire was profound.

“This massive influx of Iberian silver significantly changed Rome’s economy, allowing it to become the superpower of its day. We know this from the histories of Livy and Polybius and others, but our work gives contemporary scientific proof of the rise of Rome. What our work shows is that the defeat of Hannibal and the rise of Rome is written in the coins of the Roman Empire.” […]

Professor Kevin Butcher, of the department of classics and ancient history at the University of Warwick, said the project had confirmed what had previously only been speculation. “This research demonstrates how scientific analysis of ancient coins can make a significant contribution to historical research. It allows what was previously speculation about the importance of Spanish silver for the coinage of Rome to be placed on a firm foundation.”

The results of the study were presented on Monday at the Goldschmidt Conference which is being held in Paris this week.