That’s the title of an exhibit opening today at the National Constitution Center in Philadelphia. Created in partnership with Italy’s Ministry of Cultural Heritage & Activities and Contemporanea Progetti of Florence, this exhibit traces the connections between the myths, ideals, culture, government, military of the nascent US republic and the Roman Republic.

Three hundred Ancient Roman and post-Revolutionary artifacts illustrate how much the founding of America owes to Rome, culturally and politically. There are items in the exhibit that I’ve never seen — like a bronze eagle from a standard of the Roman legions — and I grew up in Rome.

The new republic (from res publica, literally “public thing” or “public affair”) was a dangerous undertaking, Winterer says, and all parties knew it. “They examined Rome and its history as if it were a cadaver at an autopsy,” she says. “And they examined it closely. They asked: ‘What worked? What should we do? What mistakes should we avoid?’ ”

Grey says that “the founders deliberately appropriated images, themes and language from Rome to build up their self-image.” People had their portraits painted in Roman dress. They aspired to the dignity and grandeur of the world’s most famous republic.

This is why you find so many delicious anachronisms in D.C. like a statue of George Washington half nekkid in a toga.

That cultural bond with ancient Rome continued for the first century of the United States’ life. Roman style informed US architecture, school curriculums, statuary, even the government itself with its elected representatives and a strong but revolving executive.

These links to Rome are so ubiquitous they’ve almost become white noise. The aim of this exhibit is to renew consciousness of the Roman roots of our Republic.

The exhibit is divided into three parts (like all of Gaul!). The first section is “Building a Republic” and looks at the beginnings of both the Roman and the American republics. Roman artifacts are displayed along with early (and even some contemporary) US artifacts, like Roman gladiator helmet juxtoposed with a helmet worn by Philadelphia Eagles receiver Harold Carmichael. 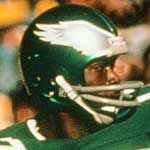 The second section, “A Classical Revival,” presents Roman arts and culture through Pompeiian artifacts and how they influenced American arts and culture. The third section is called “Expansion and Empire” and displays artifacts from the post-Republican empire that Rome became, comparing its growth to that of the United States from the original 13 colonies to the Manifest Destiny expansion across the continent.

The Constitution Center’s website has a nice overview of the exhibit. They call it a walkthrough but it’s not as comprehensive as the name suggests. Still, it gives a tantalizing glimpse into the artifacts on display.

Here’s a quick YouTube about the 18th and 19th century American affinity for ancient Rome by Stanford associate professor of history Caroline Winterer who helped craft the exhibit.

One thought on “Ancient Rome & America”