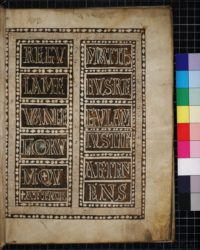 A complete copy of a long-lost book from antiquity, the Commentary on the Gospels by Fortunatianus, Bishop of Aquileia, has been translated into English for the first time. The commentary was written in the middle of the fourth century and was believed to have been lost in early medieval period. Before the full commentary was found in a library in Germany in 2012, only three fragments from it were known to exist. Now that it has returned to us in its complete glory, it is the oldest surviving Latin commentary on the Gospels.

About 100 pages long, Fortunatianus’ commentary is divided four sections: an overview on the characteristics of the four Gospels, a detailed treatment of Matthew in three chapters, an index listing the 160 chapters of the commentary and lastly the commentary itself. Matthew gets the vast majority of the bishop’s attention, with 129 of those chapters covering the Gospel of Matthew. The famous opening verses of John get 18 chapters. Luke gets a little something with 13 chapters. No soup for Mark.

The commentary’s long-lost identity was rediscovered in 2012 by Dr. Lukas Dorfbauer from the Corpus Scriptorum Ecclesiasticorum Latinorum (CSEL) of the University of Salzburg. He found it in Codex 17, a 9th century manuscript in the collection of the Archbishop’s Diocesan and Cathedral Library in Cologne. It was catalogued as an anonymous commentary, but Dorfbauer recognized it as a copy of an older original and when he read further he discovered three quotations that were the only known remnants of Fortunatianus of Aquileia’s gospel commentary. 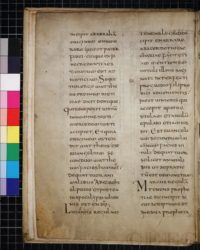 According to Jerome’s account of him in De Viris Illustribus (On Illustrious Men), Fortunatianus was Bishop of Aquileia during the reign of Emperor Constantius II (r. 337-361). His commentary was important enough to rate a mention, but as far as Jerome was concerned, Fortunatianus was a heretical liar who was “considered detestable” because he had badgered and abused Pope Liberius into accepting Arianism after Constantius II, who supported the Arian side, had exiled the Liberius over the controversy.

Other than Jerome’s writings, there is no evidence of any conflict between the Arian Fortunatianus and the Orthodox Liberius. The Pope speaks of Fortunatianus in glowing terms in a letter to Eusebius, with no reference to any disagreement over whether, as Arius posited, Jesus Christ was separate and subordinate to God the Father.

“I have also sent letters to Fortunatianus, our brother and fellow bishop, whom I know does not fear human persons and has greater consideration for the future rewards, so that he too may see fit to be vigilant with you even now, for his personal integrity and for the faith which he knows he has kept even with the risks of the present life.”

Nor is there incontrovertible evidence that Liberius ever backed down from his vocal opposition to Arianism. The three letters that indict him for caving to pressure from the emperor are very likely forgeries.

Even as the question of the nature of the Christian Godhead raged in the highest ecclesiastical and imperial circles, even the most rabid Niceneans held Fortunatianus’ gospel commentary in high regard. Jerome admitted with characteristic grudging gracelessness that he had referred to Fortunatianus’ work when writing his own gospel commentaries.

Jerome wrote at the very end of the 4th century A.D.; after that, there are only a smattering of references to Fortunatianus’ commentary which don’t even credit the author by name. Centuries would pass before Fortunatianus got a few namedrops again. Carolingian scholars mention him by name in the 9th century, but wistfully remark on how the work itself was impossible to find by that point. Copies of the commentary were likely purged because of his purported Arian beliefs. As Jerome put it, his work was “held in detestation” too just like he was.

Dr. Dorfbauer began work on a new edition of the commentary in 2013, publishing multiple papers on the work as he progressed. Now he and Dr. Hugh Houghton, of the University of Birmingham’s Institute for Textual Scholarship and Electronic Editing, have created an English translation of Commentary on the Gospels by Fortunatianus of Aquileia.

“Most of the works which survive from the earliest period of Latin Christianity are by later, more famous authors such as St Jerome, St Ambrose or St Augustine and have attained the status of classics. To discover a work which predates these well-known writers is an extraordinary find.

“One of my contributions was to compare the biblical quotations in the Cologne manuscript with our databases here in Birmingham. Parallels with texts circulating in north Italy in the middle of the fourth century offer a perfect fit with the context of Fortunatianus.

“Astonishingly, despite being copied four centuries after the last reference to his gospel commentary, this manuscript seems to preserve the original form of Fortunatianus’ ground-breaking work.” […] 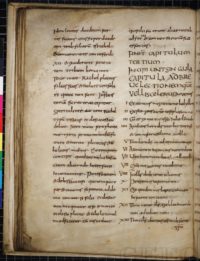 The biblical text of the manuscript is of particular significance, as it predates the standard Latin version known as the Vulgate and provides new evidence about the earliest form of the Gospels in Latin.

The identification of the lost manuscript has also allowed the researchers to identify other, shorter pieces as the work of Fortunatianus. Previously these works had been assigned to other ancient authors, such as Chromatius, a later Bishop of Aquileia, or Hilary of Poitiers but are now proven to be extracts from Fortunatianus.

Existing textbooks about the early reception of the Gospels will need to be revised to take account of this major find, which also contains important new material for liturgical studies and other aspects of early Christianity.

The best part of all is that this newly translated edition of a prodigal son of ancient literature has been returned to us in digital form. The entire book is available for free online in pdf format. It’s a beautiful fusion of ancient source and digital technology, and a perfect wheel-has-come-full-circle moment because Dr. Dorfbauer rediscovered the commentary while browsing the digitized version of the manuscript.

You can follow in his footsteps on the extraordinary Codices Electronici Ecclesiae Coloniensis website, which contains digital reproductions of all the medieval manuscripts owned by the Archbishop’s Diocesan and Cathedral Library in Cologne.