An old find is giving us new information about the lifestyles of the rich and clerical in medieval Scotland. The bones of six bishops were excavated at Whithorn Priory in Galloway in the late 50’s and 60’s, but there wasn’t much in the way of clues to their identities. 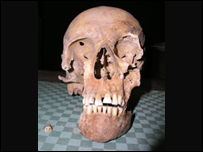 New radiocarbon dating has identified the bishops by their date of death, and new dietary analysis has determined that they supped richly on fine meats and large fish.

Mind you, even ordinary Scots ate better in the middle ages than modern ones. I blame the McDonald clan.