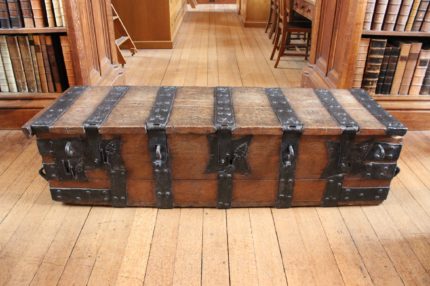 The Billingford Hutch, a large and sturdily-built oak chest with heavy iron bands, hasps and locks, was used as a strongbox in the late Middle Ages. It’s named after Richard de Billingford, who was the 5th Master of Corpus Christi College (founded in 1352), mastering it for an impressively long stint from 1398 until 1432. In 1420, he started the college’s loan program, donating what was then the princely sum of £20 as seed money to loan to scholars chronically low on cash. They could withdraw funds up to 40 shillings (ca. £2) using their valuables (manuscripts, mainly) as collateral. The £20 was kept in a locked chest under the vigilant eye of three custodians until a withdrawal was made. The books or other valuables the debtor was using as collateral were then placed in the chest until the establish repayment deadline. If the debtor did not manage to pay back the loan on time, his stuff was sold immediately and the sum owed returned to the chest. If the items sold for more the amount owed, that went into the chest too. The debtor got none of it.

The university loan chest system was widely practiced in institutes of higher learning at that time. Billingford didn’t invent it; he was the first to implement it at Corpus Christi is all. Other colleges at Cambridge had chests of their own, but most of the chest themselves are long lost. Corpus Christi still has their iron and oak ACME safe, and even more rarely, it has retained the registers that recorded the cash and collateral flow for more than three centuries. It’s because of those registers that we know how frequently the loan chest was used and by whom. Every fellow and master at the college is listed as having borrowed from it, and while as you might expect manuscripts do dominate, what with them being academics and all, they also used precious religious objects, silver spoons and salt cellars. 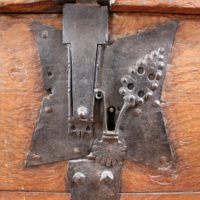 The chest itself likely predates 1420, but we don’t know its exact age. Nobody knew why the locks were decorated with images of an undetermined leaf either. That changed in September of this year when the chest was moved to Parker Library and fell under the unblinking Sauron-like eye of one particular visitor. Check out this wonderfully nerdy chain of events:

Jeremy Purseglove, environmentalist and Cambridge resident, visited the Library during Open Cambridge in September 2017. “It was a wonderful chance to get a glimpse of some of the Library’s medieval manuscripts,” he said. “We were given a fascinating talk by Alexander Devine, one of the librarians. He showed us a massive chest that had recently been moved to the Library from elsewhere in the College. My eye was drawn to the leaf shapes in the metal work.”

The chest is made from oak planks and measures approximately 1.8m x 0.5m x 0.4m. It is reinforced by numerous iron bands and five iron hasps, secured in three locks, all operated by different keys. Each of the lock plates (the metal plates containing the locks, hasps and keyholes) is decorated with the outline of a plant punched into the metal.

No-one knew the significance of this decorative detail. Purseglove, who is passionate about plants, suspected the distinctive shape was likely to be that of moonwort, a fern much mentioned by 16th-century herbalists. He said: “I rushed home and looked it up. I found that it had been associated with the opening of locks and guarding of silver.”

It was such a strong association that herbalist Nicholas Culpepper wrote about it in his seminal 1653 volume The Complete Herbal. His description of the plant is as artfully rendered as the motif on the chest’s iron fittings:

It rises up usually with but one dark green, thick and flat leaf, standing upon a short foot-stalk not above two fingers breadth; but when it flowers it may be said to bear a small slender stalk about four or five inches high, having but one leaf in the middle thereof, which is much divided on both sides into sometimes five or seven parts on a side, sometimes more; each of which parts is small like the middle rib, but broad forwards, pointed and round, resembling therein a half-moon, from whence it took the name; the uppermost parts or divisions being bigger than the lowest. The stalks rise above this leaf two or three inches, bearing many branches of small long tongues, every one like the spiky head of the adder’s tongue, of a brownish colour, (which, whether I shall call them flowers, or the seed, I well know not) which, after they have continued awhile, resolve into a mealy dust.

Governed by the celestial power of our satellite, moonwort leaves were reputedly an excellent tonic against menstrual irregularities, vaginal discharge (if you’ve ever read old medical books, and I have, you’ll know that how to combat the scourge of “the whites” was a huge subject of discussion for centuries), and another other unwanted emission of body fluid. Culpepper thought it was most effective in combination with other herbs to help heal wounds. He concludes his description with a reference to its vaunted lock-picking powers:

Moonwort is an herb which (they say) will open locks, and unshoe such horses as tread upon it. This some laugh to scorn, and those no small fools neither; but country people, that I know, call it Unshoe the Horse. Besides I have heard commanders say, that on White Down in Devonshire, near Tiverton, there were found thirty horse shoes, pulled off from the feet of the Earl of Essex’s horses, being there drawn up in a body, many of them being but newly shod, and no reason known, which caused much admiration: the herb described usually grows upon heaths.

Hmmm…Seems like it would be the opposite of something you’d want guarding the locks on your cash and saleable goods. Oh well, can’t argue with results, I suppose. The Billingford Hutch kept its secrets close for 500 years, first money and valuables, then information.

[Librarian Alexander] Devine said: “The Billingford Hutch is probably the best surviving example of its kind in Europe. To have a possible answer to the puzzle of its decorative motif is fantastic. We’re immensely grateful to Jeremy for enriching our understanding of its history. His wonderful discovery is further proof that sharing your collections with the public is the key to unlocking their secrets.”