Conservators at the Queen Anne’s Revenge Conservation Lab in Greenville, North Carolina, have discovered something they never expected to find on a shipwreck: paper, wadded up into a plug and stuffed down the barrel of a breech-loaded cannon, one that would have been fired by men under the command of infamous English pirate Edward Teach, aka Blackbeard. The Queen Anne’s Revenge was the flagship of his fleet. It ran aground in the treacherous waters of the Inner Banks of North Carolina in 1718 and was discovered in 1997.

The North Carolina Department of Cultural Resources (NCDCR) conservation team have been cleaning, conserving and documenting artifacts from the Queen Anne’s Revenge shipwreck site off the coast of Beaufort Inlet since 2006, and committed to full recovery of all the archaeological materials in 2014. We’re talking hundreds of thousands of objects, 280,000 of them recovered before the decision was made to leave no Blackbeardiana behind. It was during the course of this ambitious project that the paper was found in the cannon.

These fragments survived 300 years on the coastal seabed of North Carolina because they were protected by being balled up tight in a confined space. The wadding and cannon coffin kept them from dissolving into nothingness. In that context, the waterlogging was the key to its preservation rather than a means of destruction.

That’s not to say that the paper was in tip-top shape and could be read like a Kindle. The QAR Lab’s artifact conservators teamed up with paper conservation experts, art conservators and scientists to do examine the mass. Upon closer examination, conservators found that the plug of sodden paper were all that was left of a book, tiny fragments of pages at the most the size of a quarter. Still, there was faint text still legible on some of the fragments.

With such small snippets to work with, researchers had to spend months investigating the source of the pages. They were finally able to identify it as the 1712 first edition of A Voyage to the South Sea, and Round the World by Captain Edward Cooke.

As the prolix full title indicates, the book documents Captain Cooke’s voyages undertaken in 1708, 1709, 1710 and 1711. It’s a journal of routes, weather patterns, notable events, an atlas with current maps of coastlines, details on native flora and fauna and histories of the countries and their residents. The notable events have something of a recurring theme: the taking of “prizes,” meaning the overt and

unrepentant assaults on Spanish treasure galleons along the Manilla route. Cooke talks about it constantly, which ships they took, when and where. It’s really something of pirate’s manual to despoiling Spanish shipping, truth be told, complete with essential navigation details of relatively fresh date. I can see why Blackbeard’s crew would be into it. The feeling would not have been mutual.

Cooke’s book was a “voyage narrative” describing his adventures on an expedition made by two ships, Duke and Dutchess, which sailed from Bristol, England in 1708. The expedition leader was Captain Woodes Rogers, who also published an account of the expedition, and who was later sent in 1718 as Royal Governor to rid the Bahamas of pirates.

Voyage narratives were popular literature in the late 17th and early 18th centuries, inspiring new voyages both real and fictional. Both Cooke’s and Rogers’ works describe the rescue of Alexander Selkirk from an island on which he had been marooned for four years. Selkirk’s story became the inspiration for Daniel Defoe’s 1719 novel, “Robinson Crusoe.” Although books like these voyage narratives would have been relatively common on ships of the early 18th century, archaeological evidence for them is exceedingly rare, and this find represents a glimpse into the reading habits of a pirate crew.

This unique find from the wreckage of Queen Anne’s Revenge provides archaeological evidence for books carried on ships in the early 18th century, and adds to our knowledge of the history of Blackbeard’s flagship and those who sailed her. The historical record has several references to books aboard vessels in Blackbeard’s fleet, but provides no specific titles; this find is the first archaeological evidence for their presence on QAR. 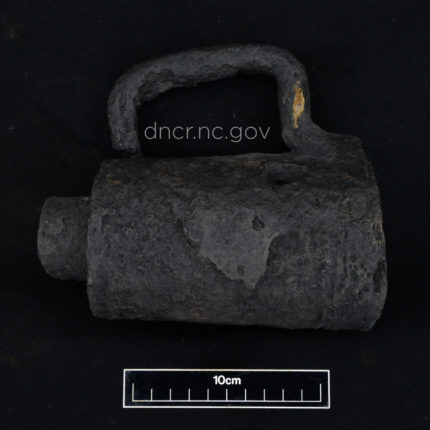